Patience Carter has been revealed as one of the lucky survivors of the mass shooting at the Orlando gay nightclub Pulse.

The 20-year-old told her recounts of facts as Omar Mateen killed 49 people and injured over 50 others on Sunday. Patience Carter is a Philadelphia resident and revealed she was on vacation in Florida for a few days of vacation. She was at Pulse on Sunday night with two friends, Akyra Murray, who sadly didn’t make it and Tiara Parker who was injured.

Speaking to media, Carter told how Mateen spared the lives of African Americans. Carter said that Mateen went into a bathroom where she was and asked if there were African-Americans in there. She did not raise her hand, but another man did and said that there were six or seven in the bathroom.

She recalled, next thing she heard was the gunman saying,

“You know, I don’t have a problem with black people. This is about my country. You guys suffered enough.”

Carter also described her harrowing survivor story saying she witnessed Mateen killing his three last victims, just before police got to him.

“If it wasn’t for that person shielding me it would’ve been me shot and I wouldn’t be sitting here today,”

Accoridng to Carter and from what she heard and witnessed that horrific night, Mateen wasn’t going to stop killing people till he was killed. Though happy to be alive, she didn’t not scape without uninjured. After being dragged out of the club because she was unable to walk, Patience Carter found out at the hospital, the bullet shattered the femur bone in her right leg. 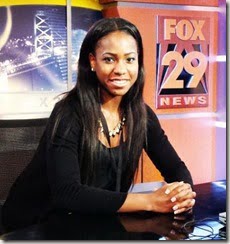 Patience said she and her friends were at Pulse after a Google search for the hottest club in town. The young ladies were driven to the club by one of their parents.

Patience Carter happens to be an intern at WTXF Fox 29 in Philadelphia. She is currently a student at New York University and is the recipient of the Emma Bowen Foundation scholarship.

According to social media info, she attended University City High School in San Diego, California and Harambee in Philadelphia, Pennsylvania. Carter is also listed as the CEO at GEN NEXT TV.

Patience was in surgery until Monday morning, she is expected to make a full recovery.