Lesly’s husband is best known as the host of the American television game show Wheel of Fortune. It’s been Lesley who has been by his side since their nuptials in the late 80’s; sharing all the ups and downs. Like last year when then 73-year-old is Sajak had to received emergency surgery to correct a blocked intestine.

Sajak widely known from Wheel of Fortune fame, is now in its 38th season of syndication. He has hosted the show since 1981. The popular game show celebrated its 7,000th episode last year.
Most recently, Lesly’s husband made headlines after the 74-year-old called a contestant, ungrateful. Sajak who ultimately apologized, said he was ‘just teasing.’

Born October 26, 1946; the Chicago native enlisted in the Army in 1968 and was dispatched to Saigon before being assigned to a military base in Texas.

After his service, Sajak bounced between jobs in radio, as a hotel desk clerk, and as a weatherman for KNBC in Los Angeles before game show giant Merv Griffin approached him in 1981 to replace a departing Chuck Woolery on the daytime series Wheel of Fortune.

He also had his own talk show though it was short lived. The Pat Sajak Show debuted on CBS in 1989 and lasted just 15 months.
Speaking of his personal life, Lesly is actually Pat’s second wife as he was first married to Sherrill Sajak from 1979 until their divorce in 1986. 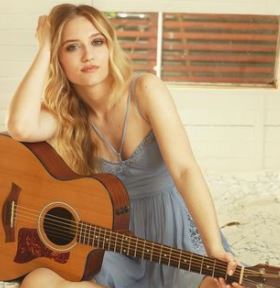 In addition to Lesly Brown, there’s another important woman in the life of the longtime gameshow host. That would be his lovely daughter, Maggie Sajak.

Though she bears the prominent last name, Maggie has become notorious on her own right. The pretty young lady has pursed a career in entertainment, specifically in the country music scene.

In his lifetime, Sajak has been married a couple of times. His first marriage lasted seven years. He tied the knot to Sherrill Sajak, in 1979 after a year of dating and were divorced in 1986.

Sherrill Sajak is best known for her marriage to Pat. She was always the type to remain out of the spotlight. The two had met in Nashville in 1978. The couple split in 1985 and were officially divorced in 1986.
The couple lived more than comfortably at the time and following their divorce their house was sold for $700k.
Sherrill Sajak and Pat did not have any children together, however she and Pat raised her son from a previous marriage during their time together.
After their divorce, not much more is known about her. It is believed she never married again and is currently in her 70’s.

Pat wasn’t alone for long. The longtime game show host tied the knot again to Lesly Sajak, in 1989. The two met at the 1988 opening of Champions The Original Sports Bar in Irvine, Ca. -and have been married for 30-years now. 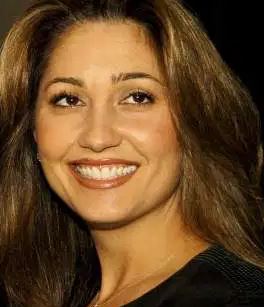 Gorgeous Lesly Sajak is a former model turned photographer. She was born Lesly Brown on February 18, 1965; which makes her 19-years her husband’s junior.
Lesly Sajak is a Maryland native born to parents Michael and Maria Brown; she grew up along with two sisters, Kelly and Wendy Brown.
She graduated from Maryland University with a degree in television production.
She began her career as an actress and model and was even crowned Miss Georgetown. As a model she was also featured in Playboy magazine’s “Women of Washington” spread in the November 1988 issue.

However, she left modeling to pursue a career in photography. Besides featuring on her husband’s highly acclaimed television show, she was also featured on Sandals Emerald Bay.

Lesly met Pat in 1988 through mutual friends in California. Their 18-year age gap didn’t stop the two of falling in love, however it wasn’t exactly an instant connection. She once said during an interview
“He was fun and easy to talk to,” “But it wasn’t romantic.”

Everuthing changed when Lesly took a trip to Mexico and Pat was definitely borderline jealous. After a year of dating they headed to the altar. Sajak’s on-screen partner Vanna White, was also in attendance.

Though Lesly Brown and Pat Sajak remain a happily married couple, it is safe to say they have faced their fare share of controversy. Pat and on-screen partner Vanna White have been one phenomenal team for about four decades, sparking rumors about their close bond. Speaking about their relationship they have said they have never dated, instead they view each other as best friends.

Lesly and her longtime husband are the proud parents of two adult children together; son, Patrick and daughter, Maggie. 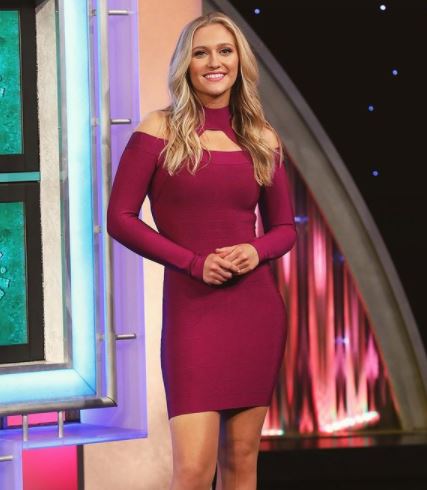 Maggie Sajak is Pat Sajak’s daughter. Maggie Marie Sajak, born on 5 January 1995. Like her famous father, Maggie has chosen a life in the media.
The blonde discovered her love of music in her teens and has since recorded a couple of albums. 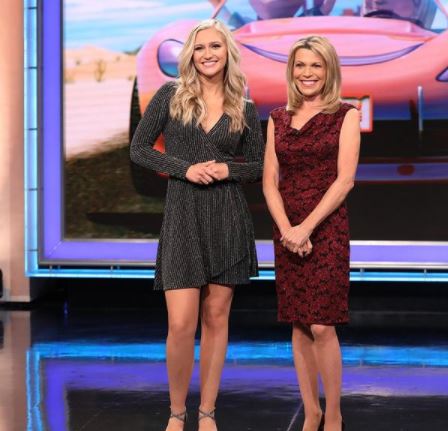 Country singer, Maggie Sajak began playing music in her teens after she got a guitar for her birthday. She recorded the first tune, “First Kiss” in 2011. She’s made a couple of appearances on her father’s show. In fact, Maggie made her television debut as a baby when her father brought her on the set of the show in 1996.

She is also known for the tracks “Wild Boy” and “If I Was Gonna Go.”
In addition to her music career, Maggie also continued with her studies. She graduated from Princeton University in 2016 with a degree in history. It was also reported she had an interest in attending medical school, however is unclear if she has.
Most recently, the pretty blonde alongside Vanna White, appeared earlier this year filling in for her father in a couple of episodes of the Wheel of Fortune.

Miss Sajak keeps active on social media, she has an active Instagram account where she has over 8k followers.

Maggie’s older brother Patrick Michael James Sajak, was born on 22 September 1990. The older sibling takes after his mother who enjoys going under the radar.