Paola Paulin is an actress and apparently the new leading lady in the life of singer, Justin Bieber. Though the 23-year-old has been linked to many women in recent years, it appears Paulin is the real deal.

The two were caught hanging out earlier this week and it wasn’t your ordinary date. Paola Paulin was spotted attending church with the pop star in California and the reason for that is because Justin apparently wanted to get the approval of his pastor, Carl Lentz –before making it official with the pretty brunette.

Things seem to be getting serious between the couple, that’s why we bring you the top ten facts about Justin’s gal, Paola Paulin. Meet her below. 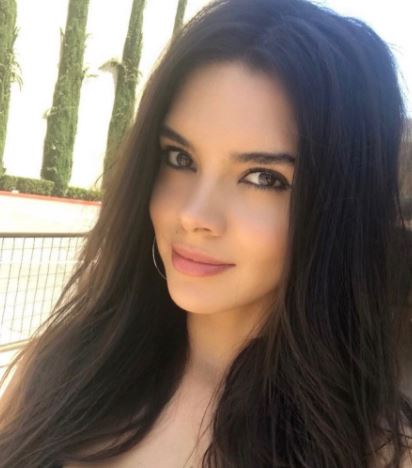 #1 She is older than Justin

Paola Paulin was born November 23, 1990 –making her four-years Justin’s senior who was born in 1994. The lovely lady was born in Mexico and raised in Colombia according to her IMDb.

Paulin an International Business Management degree from Pontifical Bolivarian University. Following graduation, Paulin was hired by ProColombia, the Colombian Government Trade Bureau as an Investment Assistant, and relocated to Miami.

3# She represented Colombia in D.C.

As part of her studies, Paulin traveled to the Organization of Open States headquarters in Washington, D.C. as one of twenty students selected to represent Colombia.

#4 She began her career modeling

After Paulin decided to give modeling an acting a chance in 2012, she was soon signed to Elite Model Management, she began to model for runways in SwimWeek, Mercedes Fashion Week, and Miami Funkshion. Her print campaign work includes Skechers, Kohl’s, Bon-Ton, L’Oreal, and the face of Nassau Paradise Island Tourism Board.

#5 She is also a trained actress

Paulin has received training in most major acting and performance techniques including the Uta Hagen Technique, the Meisner Technique, and the Lee Strasberg method.

#6 She has worked with CNN Latino

Back in 2011 Paulin hosted Vida Miami TV for CNN Latino, filming in both Mexico and the U.S.

The model and actress has lend her voice for TV shows including South Park. Her most important role so far has been on the HBO hit series, Ballers, produced by Mark Wahlberg and starring Dwayne “The Rock” Johnson as part of the cast with role of Michelle.

#8 She is very popular on social media

From her success, Paola has gained major following on social media, she has over 100K followers on Instagram.

According to reports, the two originally went to church together on September 27 and came back to church again on Wednesday. A source said they “were cute together,” another source said “Justin wanted Paola to meet the pastor, so he introduced her.”

Pastor Carl is said to be helping Justin in fixing his bad boy reputation.

#10 She hasn’t confirmed if she is dating Justin

Neither has confirmed the news on social media, but if they are indeed dating, the two are taking their time before making it public.

Does Paola reminds you to anybody?