Jhon Jairo Velásquez -a Colombian criminal known as the former head of the hit men of Pablo Escobar died in Bogotá. He was 57 years old.

John, widely known by his nickname ‘Popeye’ died in Bogotá due to stage four stomach cancer.
Jhon Jairo Velásquez Vásquez, is described by local media as the feared hitman of Pablo Escobar linked to many of the worst crimes of the Medellin cartel.
Velasquez, had been imprisoned since May 2018 for a case of extortion and concert to commit crime. But this is perhaps the lesser of his numerous crimes.

Popeye received the title of being the chief of hit men of Escobar during the ****** war that was fought during the 80’s and 90’s in Colombia. The lieutenant of the brutal drug lord confessed to 300 murders. He also said he had participated in another 3,000 and agreed to have coordinated a hundred car bomb attacks planned during the worst times of the big cartels, who fought a war against the government to avoid extradition to U.S. 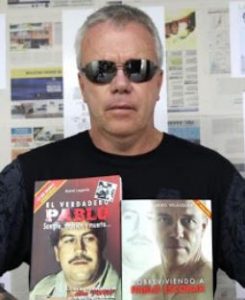 He acknowledged having been directly involved in crimes such as the attack on Avianca’s flight in which more than a hundred people died, the kidnapping of former president Andrés Pastrana when he was a candidate for mayor of Bogotá or that of former vice president Francisco Santos when he was head of newspaper El Tiempo, among many others.

Cornered, Velasquez surrendered to the authorities in 1991 and shook society for the coldness with which he narrated his crimes. He remained in the maximum security prison of Cómbita, until August 27, 2014, when he left after serving a sentence of more than 20 years for a single crime, the murder of presidential candidate Luis Carlos Galán.

While on probation, Popeye was frequently accused of meeting with drug lords. Believe it or not, he also gained media notoriety by becoming a social media figure and ultimately his exposure led him to become a youtuber – his channel on that website had the paradoxical name of Popeye repentant. He also wrote books and participated in a number of documentaries.