Adrian’s girlfriend serves as the NYS director of Latino affairs at the office of Gov. Andrew M. Cuomo -however her top job may be in jeopardy after reports say she is being charges with domestic abuse.

According to reports, the brunette is currently facing charges of assaulting her partner and endangering her infant child. She allegedly left her baby unattended in a tub and attacked her man, Adrian Daniel Roman. Quesada is said to have grabbed him by the neck and dug her nail into his throat. At the time of the incident she was on maternity leave.
Prior to her career in public service, Quesada won the Miss Latin America beauty pageant in 2006. Melissa who graduated with a law degree -was named director of Latino affairs in 2016 having previously worked in the Labor Department. She also served on the board of the National Puerto Rican Day Parade Committee. 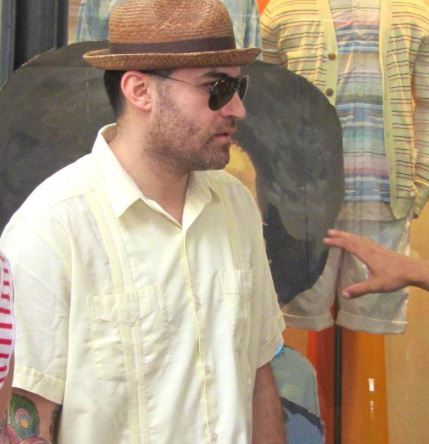 As for her boyfriend or should we say, ex-boyfriend -Adrian Daniel Roman who is now estranged from Quesada – sustained lacerations to his neck and difficulty swallowing and sought medical attention for his injuries. As a result of the attack, Adrian Daniel Roman filed a deposition/complaint with the New Rochelle Police Department.

According to his website, Adrian Daniel Roman who also goes by the nickname ‘Viajero’ -is a versatile art director, illustrator, designer and artist.
According to his social media, he went to Fort Hamilton HS and is an Artist at Viajero Art.
He graduated from New World School of Art in 2001, where he studied drawing and sculpture. He also received a degree in graphic design.
Prior to launching a freelance career, Adrian was the Design Director at Takkle.com. According to his extensive resume on LinkedIn, he is a Senior User Experience Designer Retail and Tooling at Walmart eCommerce.

He has exhibited his work throughout the United States and Puerto Rico. He currently resides in Brooklyn, NY.