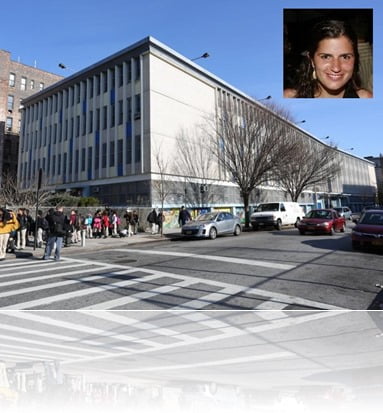 Meet Nina Gribetz, she is a teacher at Washington Heights Expeditionary Learning School, 12-yea-old Stephanie Almonte was one of her students, Stephanie sadly was the victim of bullying, she ultimately took her life and the person to blame was the person who bullied  her, that person was her math teacher Ms. Nina Gibetz.

Stephanie Almonte was according to her family and classmates constantly tormented by her teacher, Ms. Gribetz

“She was always on top of Stephanie,” said a 14-year-old friend. “Stephanie dropping a pencil would be detention. Just her. If it was me, it would be okay.”

“If there was any noise or disruptiveness in the class, Ms. Gribetz would always blame Stephanie, even if she had not spoken a word,” the suit said.

32-year-old Nina Gribetz, one of the daughters born to Allen and Jessica Gribetz earned her bachelor’s degree from the university of Pennsylvania in 2005, she received her master’s degree fro Pace university in 2008.

Between 2005 and 2006 Nina travel to Jucicalpa, Honduras  and worked as a math teacher at Day Star School, in 2006 she went back to New york and worked with the Bronx School of Science Inquiry and investigation, in 2009 Nina moved to Washington, DC got  a job as a 4th grade math teacher at Achievement Preparatory Academy Charter School.

She started her  job as a 7th grade math teacher at Washington Heights Expeditionary Learning School in August, 2011.