Antoine Fuqua appears to be the new man in the life of model, TV personality and businesswoman, Nicole Murphy.

The two were photographed kissing while vacationing in Italy over the weekend. The alleged new couple however is deniying a romance or at least Nicole is. The 51-year-old adressed the photo saying they are ‘family friends’ and added they only exchanged a friendly hello. She also admitted to TMZ to have mistaken Antoine with being single.

Murphy was famously married to actor/comedian Eddie Murphy for 12-years and, the two share five kids together; son Myles and daughters Bria, Shayne, Zola and Bella. Her last high-profile relationship was with her ex-fiance, Michael Strahan, though the two called it quits in 2014.

Fuqua has been married to actress Lela Rochon since 1999; she is the mother of the couple’s two teen children, 16-year-old daughter Asia and 15-year-old son, Brando. Fuqua also has a son named Zachary from a previous relationship. 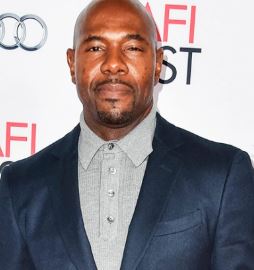 The 53-year-old is a well known movie director and producer; the Pittsburgh, Pennsylvania native is well known for directing the acclaimed film Training Day.
Antoine Fuqua attended West Virginia University, where he played college basketball while studying electrical engineering. In the late 80’s he moved to New York to pursue a career in film.

While in NY he landed a job as an associate producer and first assistant director for a commercial and music video firm. He began as a music video director, working with the likes of Toni Braxton, Coolio, Stevie Wonder and Prince; and later made the transition to films.
After forming his own production company, Reel Power, Fuqua directed his first short film entitled Exit and he was soon signed as a director with Propaganda Films.
Since then, he is knonw to focused in the action and thriller film subgenres. In addition to Training Day, he is also directed King Arthur, Shooter, and The Replacement Killers.

Fuqua has continued working steadily in recent years, with hits like the action thrillers; Olympus Has Fallen (2013) and The Equalizer (2013), the sports drama Southpaw (2015), and the Western remake The Magnificent Seven (2016).