Nauman Hussain is the son of Shahad Hussain –owner of Prestige Limousine, the limo company charged in the limo wreck that killed 20.

Prestige Limousine has been charged with criminally negligent homicide following the crash that killed 17 party guests, the driver and two pedestrians in Schoharie, New York. The wreck is described as the deadliest land-vehicle accident in the U.S. in recent years.

Nauman Hussain –who was left in charge of operating the business while his father is out of the country –was arrested today at a traffic stop. The arrest comes four days after he rented a Ford Expedition stretch limousine that ran a stop sign and careened into a ditch killing a total of 20 people over the weekend. 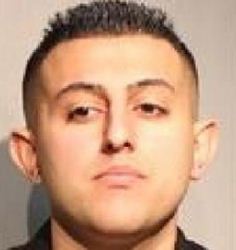 What’s worse, state police said the limousine involved had failed an inspection in September and shouldn’t have been on the road. The company has had four other vehicles taken off service.

The company’s lawyer however, says the safety issues were fixed prior to getting back on service and put blame on the driver. Gov. Cuomo also revealed the driver did not have proper documentation.

Prestige Limo was ordered to stop operations after the crash. Nauman Hussain is currently in custody of New York State Police. The investigation is still ongoing.

Nauman’s father and the company’s owner, Shahad Hussain, was out of the country at the time of the deadly crash. Shahad arrived to the US in the 90’s after he left Pakistan where he was jailed for murder.

Once in the US, he applied for political asylum and began working for the DMV as a translator.

According to the Daily Mail, Shahad, who also goes by ‘Malik’, worked as an informant for the FBI after being caught running a DMV scam where he helped test takers cheat. He started going undercover in mosques in Newburgh, New York, to record conversations with alleged terrorists.