Pamela Woods is the sister of convicted murderer, Nathaniel Woods -who was executed in Alabama, the first execution of this year.

Pamela Woods was perhaps her brother’s biggest supporter and defender of his innocence. She has always said her brother was in the wrong place at the wrong time.
Pamela’s brother was put to death for the murder of three police officers despite a recent campaign to save him. He was accused, charged and eventually tried and found guilty for masterminding an ambush against the officers as they tried to arrest him on drugs charges back in 2004.
He was exectued by lethal injection at Holman Prison. Woods was pronounced dead at just after 09:00 (15:00 GMT). Till the moment of his execution he said he was innocent.

Court document from the 2004 case, say Woods and his friend Kerry Spencer got into an argument with two of the police officers and threatened them. Later the same day, the officers were murdered as they tried to arrest both Woods and his friend at a suspected drug house in the city of Birmingham.
Prosecutors said it was Spencer who had opened fire on the officers but accused Woods of luring the officers. He was convicted by 10 out of 12 jurors. 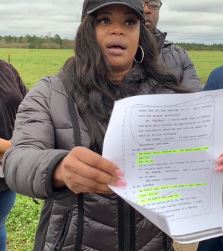 In a shocking letter even the gunman, Spencer -who awaits his own execution; labeled Woods as innocent writing “Nathaniel Woods is 100% innocent, I know that to be a fact because I’m the person that shot and killed all three of the officers.
“Nathaniel Woods doesn’t even deserve to be incarcerated, much less executed.”

Nathaniels’ sister Pamela Woods -traveled to the Alabama State Capitol in Montgomery to hand-deliver letters asking to halt the execution. As she spoke to reporters, she held a page from her brother’s trial transcript that shows Nathaniel Woods was surrendering to police when Spencer opened fire.
Pamela also made efforts online, often sharing information through her social media and asking friends to call governor Kay Ivey not to execute an innocent man.

Pamela Woods is currently based in Atlanta, Georgia. She and Nate Woods are both children of Nathaniel Woods Sr.
Activists and even celebrities including Kim Kardashian West, intervened in the case. Martin Luther King III, called Woods’ death a “mockery of justice”.