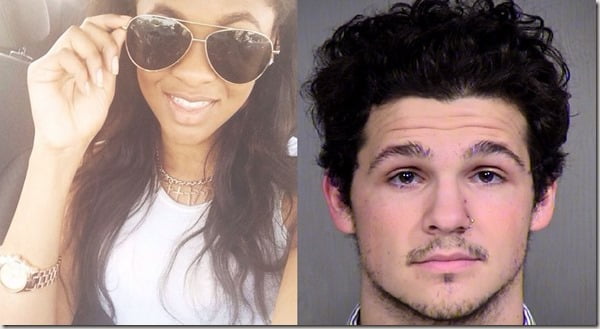 According to MTV News:

Los Angeles police arrested Naomi Charles, and Tylor Scott on Thursday (June 5), while they were walking down a street in North Hollywood after they recognized them from surveillance footage, according to Us Weekly.

But as it turns out, 19-year-old Tylor is a pro! He has been in the car stealing business for a while and has successfully pulled it off several times! (That is his mugshot above)!

According to the police report … obtained by TMZ, Scott was arrested in September for stealing his parents’ car; at the time he told cops he just went on a joy ride “for the thrill of it.” Days later he argued with his mom and stole another car, which he drove around for a few days until it got a flat, he allegedly left it in a 99 Cent Store parking lot.
In December, he was arrested for stealing a Mercedes CLK near the University of Arizona.  According to the police report … a month before he walked into an open garage, saw the keys hanging from the wall and made off with it.

Born March 8, 1995 Tylor Morgan Scott is originally from Arizona. He is 5’05, weights 160 lbs and is not a bad looking kid! He moved to Los Angeles a couple of months ago and has held several jobs, including sales man at Express Clothing and Barista at Teavana.

Reports say Tylor has a drug problem. Find him on Facebook here. On the other hand we have, female accomplice Naomi. She is from Los Angeles and she and Tylor are an item. Pin21-year-old Naomi Charles is an athlete, she has quite the bod, and quite the audience, on Instagram she has over 9000 followers and on Twitter over 300. On both social media accounts she has pictures of fast cars; so you can tell she is very into the fast life. She was born May 21, is a vegan and attended McClintock High School in Temple Arizona and is currently a student in Santa Monica College.

Tylor and his female accomplice 21-year-old Naomi Charles were both arrested on Thursday. Police also seized their vehicle, where they found several items they believed to be stolen — but it had not been determined whether the items were connected to the robbery at Miley’s home.

They were arrested for residential burglary and held under $50,000 bail.