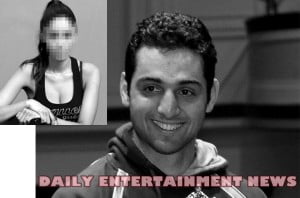 Meet Nadine Ascencao, some media spelled her name Nadine Asceucal, this is the girl who must be feeling quite relieve that she dumped Tamerlan Tsarnaev back in 2009, as we all know the 26-year-old Rusian emigrant was along his brother the bombers at the Boston Marathon that killed three people and injured over 180.

For years the name of Nadine Ascencao remained in the dark, but it was until her ex-boyfriend Tamerlan’s  crime that we heard from heard once again.

Friends of Tamerlan’s current wife Katherine Russell Tsarnaeva said he was abusing, controlling, called Katherine prostitute and ****, but he wasn’t always like that, they noticed the changed when he turned into Islam and quit drinking and smoking.

His violent behavior continued with his next girlfriend (we already know that Tamerlan and Katherine dated on-and-off from 2007 until their 2010 wedding), between late 2008 and 2009 Tsarnaec dated a girl identified as Nadine Ascencao, who he dated for three years.

On July 28th, 2009 21-year-old Nadine Ascencao, and Tamerlan then 22, got into a heated argument, she accused him of cheating on her, he fired back by slapping Nadine on the left side of her face, Ascencao called 911 and he was arrested.

Nadine Ascencao’s BF was taken into arrest at 1:05 .p.m at his or her house located on 400 block of Norfolk Street #3 in Boston. He was charged with domestic assault and battery.

Ascencao, who was 17 at that time said she dated Tamerlan in 2006 while they attended at Cambridge Rindge & Latin School, she said he was a bully in high school..

‘He was a little tough guy, but I thought that was it,’ she told the Wall Street Journal. ‘In high school, everybody acts like that. Like a bully guy, you know?

He was just like a normal person that sometimes like wanted to scare kids in high school but that was it…. He was a little tough guy, but I thought that was it.’

He was dating Nadine who is believe that eventually moved in with his in 2009 when he met Russell at a night club.

Nadine Ascencao accused him of cheating on him with Katherine which is when he slapped her, according to police records Nadine was crying hysterically when she call 911, he admitted slapping Nadine, but the charges were dropped before trial.

‘Yes, I slapped her.’ He specifically stated that he struck the left side of Nadine’s face.

25-year-old Nadine Lopes Ascencao was born on May 10, 1987, she is related to Elisiario Lopes Ascensao, who worked at Amado Cleaning Corp in Malden, MA owned by Dulca Helena Amado whose Linkedin profile shows she works in the environmental service at Beth Israel hospital where Ascencao’s former brother in-law Dzhokhar Tsarnaev remain in custody.

Ascencao said she never thought Tamerlan would have been capable of the horrible crimes he did at the Boston Marathon, to know that he was the bomber, made her feel disgusted. She added that she didn’t shed a tear when she found out he had died; however she was surprised to known that Dzhokhar who she said was a nice kid was involved in his brother’s horrible crimes

“When they said Tamerlan was dead, I didn’t cry. I was more shocked Dzhokhar was involved. He was a nice kid.”

Nadine Ascencao was questioned by the FBI during the early hours of Friday, April 19, and again that same day about three hours later from their first visit.

Nadine Ascencao lives in Brookline, MA, before that she lived in Saugus in 2006 and Cambridge from 2007 until 2008.

Nadine Ascencao’s Flixster profile is under nadinestrela which is the same username on her eBay profile.

Ascencao’s others profile are under kraseevidama which could also be her user name on Twitter, but unfortunately the account was deleted.

Nadine also said Tamerlan tried to brainwashed her, he made her wear an Islamic hijab and pray to Allah and slapped her when she wore her regular clothes, but because she adored him, she did everything he asked her just to made him happy, Ascencao added that Tsarnaev was the first man she had *** with.

“I went to his mosque a couple of times and even looked into converting to make him happy. I thought, ‘This is crazy’ — but I still did it for him.“Tamerlan had taken my virginity and said he loved me because I was pure and hadn’t been with any other guys. I was in love and scared he’d leave me if I didn’t do what he said. Looking back I had a lucky escape.”

One minute he’s this funny, normal guy who liked boxing and having fun, the next he is praying four times a day, watching Islamic videos and talking insane nonsense.

“He became extremely religious and tried to brainwash me to follow Islam. Tamerlan said I couldn’t be with him unless I became a Muslim. He wanted me to hate America like he did.

Tamerlan made Ascencao changed her complete outfits, the music she glisten to and the t.v show and movies she watched, he and Nadine even stopped having ***, because they were not married

“He wouldn’t let me watch TV or listen to the radio. He’d say, ‘TV is the project of Satan’ and claimed Satan sent us messages through commercial music. He once made me learn a verse of an Islamic prayer and if I got it wrong he’d say, ‘Well Katherine can do it

According to new research Tamerlan slapped Nadine for the last time not because he got mad when she accused of cheating on him with Russell but because she was going to a friend’s pool part wearing cut-off jeans a a crop top, this was the day that he was arrested and spent a night in jail,
Check the Police report..

Tamerlan Tsarnaev of 410 Norfolk Street #3, arrested this date for Domestic A&B after assaulting his girlfriend. Girlfriend called 911 on her cell phone indicating that she was beat up by her boyfriend.

On the above date and time while working car 1 with Officer Gamble we were dispatched to 410 Norfolk Street along with 1R Officer Hogan for a Domestic A&B. A female caller called 911 on her cell phone. The call was routed to us via the State Police.

According to the caller, she stated she was beat up by her boyfriend and was crying hysterically.

Upon our arrival Myself and Officer Hogan approached the residence of the caller. We were later called by Officer Gamble stating that he had both the victim and suspect out front. The suspect had gotten out of his vehicle and stated to Officer Gamble “She is the one who called” at which point a female exited the passenger side of the vehicle. Officer Gamble asked the victim if she was the one that had called and she stated “yes”.

I approached Officer Gamble, at which point Officer Gamble took the victim aside to speak to her. Myself and Officer Hogan then pulled the suspect aside and spoke to him in regards to the situation that took place.

The suspect then stated to myself and Officer Hogan that the victim was yelling at him because of another girl, I asked the suspect if he had hit the victim, and he stated “Yes I slapped her”. Suspect was then placed under arrest for Domestic A&B.

We then approached the victim and asked where she was hit, she stated in the face, I then asked her which side and the victim stated the left side of the face. No visible marks were seen. The victim was advised of her 209A rights and medical attention by Officer Gamble, at which point she refused.

Suspect transported to base via the wagon, Officer Lucey.

After he was out of jail, he apologized an begged her to get back together but she never did.
let’s clear something, some media are published the pics of the girl boxing with Tamerlan and saying she is Nadine, in our opinion, that girl looks more like hi wife Katherine that Nadine Ascencao, even more considering the vaccine mark and moles on her left arm, seen in the pic below and missing on the girl boxing. 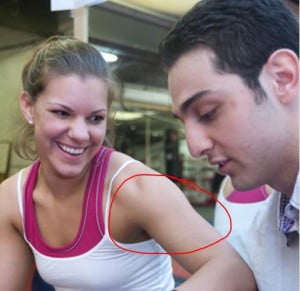 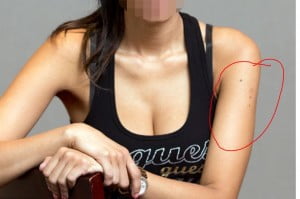