Michelle Mangan is the lovely wife of retired MLB star, Johnny Damon –who is set to appear in the all athlete season of Dancing with the Stars.

Michelle’s hubby spent 18-seasons paving his career as one of most outstanding, respected and durable players in MLB.

Johnny Damon has also been winning in the love department, he has been married to second and current wife Michelle since 2004. 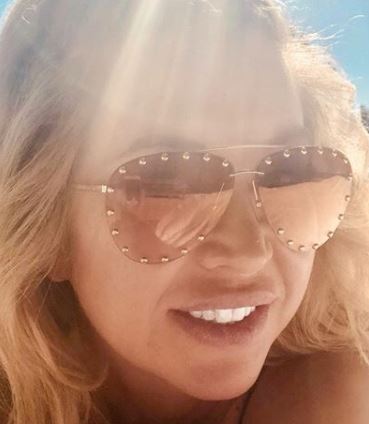 Michelle Mangan who now goes by Michelle Damon is the mother to six of his eight children. Damon was previously married to high school sweetheart, Angela Vannice –with whom he fathered twins, Jackson and Madelyn born in 1999.

Following his second nuptials, he and Michelle Mangan welcomed first child Devon Rose in 2007. Second daughter Danica Ray was born in 2008. A second set of twins Dasha and Daliah –for Johnny were born in 2012. Fifth child, Dreanna Michelle made her arrival in 2015. Michelle gave birth to sixth and last child, Dash, in 2016.

The lovely blonde and mother of six, is well known as the wife of Johnny Damon, however this former baseball wag spends a lot of time doing charity endeavors through her hubby’s Foundation –in addition of course of caring for the couple’s kids.

You can check out lovely Mrs. Damon on Instagram here.