Michael Wolff is a veteran journalist who recently published his most recent book –on his experiences interviewing former White House staffers.

64-year-old Wolf is a regular contributor to USA Today, the UK edition of GQ and The Hollywood Reporter. The New Jersey native attended Vassar College and Columbia University and has a background working as a media business entrepreneur.

However, he is best known for his columns which featured in New York magazine and Vanity Fair. In 2004 he was called the “It Boy of New York Media” he has won national awards for his reporting including a National Magazine Award for commentary in 2004.

Wolf used to be married to Alison Anthoine –who is a New York lawyer based in Cold Spring. The marriage which lasted several years until he filed for divorce in 2014, produced three children.

Wolf made headlines back in 2014 after he allegedly filed for divorce from the mother of his children without even giving her a heads up.

Alison Anthoine is the daughter of late Columbia Law School Professor Robert Anthoine and Edith Anthoine. According to a profile on Alison, she is an entrepreneurial business strategist and attorney with broad experience as a senior manager of media-related enterprises.

She is the co-founder of Quantum Media, and splits her time between a solo law practice and a legal tech company she founded in 2010, Paperlex, LLC –which provides businesses with a pain-relieving solution for managing routine contracts.

Alison Anthoine is also the Vice President of the Cold Spring Area Chamber of Commerce and a member of the village’s Zoning Board of Appeal. In the past she served as the US general counsel for a European-owned advertising group. 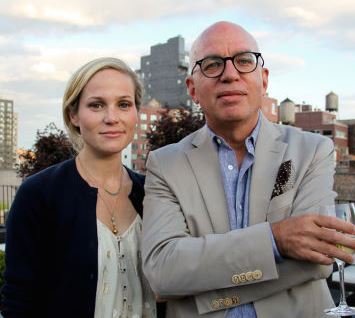 Victoria Floethe was born on July 25, 1980; she is the daughter of Ronald and Linda Floethe. She was raised along one younger brother named, Alexander.

She attended Wetsminster School and is a graduate from Vassar College. Victoria who is a freelance writer, began working at Vanity Fair in 2006. By 2011 she had become the director and producer of The Desire Project. In 2012 she was named the senior producer at Bedrocket Media Ventures.

Michael Wolf is the father of four children, three from his first marriage. He and wife of 35-years, Alison Anthoine welcomed two daughters, Elizabeth and Susanna; and one son, Steven.

Susanna Wolff Studied at Columbia University and currently lives in Los Angeles. Elizabeth Wolff lives in New York and is a Producer at RadicalMedia LLC.

Wolf is also the father of one child with girlfriend, Victoria Floethe. The couple welcomed daughter Louise in 2015.