Micah Xavier Johnson has been identified as the gunman in Thursday’s mass shooting in which at least five officers were killed in Dallas.

25-year-old Micah Xavier Johnson of Mesquite, Texas had no criminal record or known terror ties, he was killed with an explosive device.

As details become available, it gets more shocking to learn who Micah Xavier Johnson was. Just when you expect to read about some sick individual, you learn the guy had served in the U.S. Army Reserve.

Johnson lived with his mother and a neighbor described him as someone who”keeps to himself.”

Earlier this year he posted a “Black Power” poster, to his Facebook page –that has now been deleted.

It is believed he use his mother’s USV, the car was found at the scene of the shootings was listed as registered to Delphene Johnson. 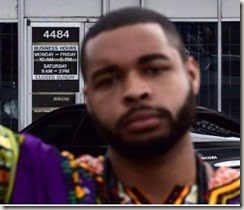 According to reports, Micah Xavier Johnson revealed to negotiators that he was upset about recent police shootings, that he wanted to kill white people “especially white officers.”

Johnson was talking about the gunfire that erupted as videos showing two African-American men shot by police in Louisiana and Minnesota. It is believed the police use of force upset Micah and he took it into his own hands.

The ambush, began during a protest over police violence Thursday night. What at first was a peaceful protest turned into the deadliest single incident for U.S. law enforcement since September 11, 2001.

According to witnesses, the crowd ran into a parking lot after shots went off. Police revealed a sniper fired “ambush-style” from an “elevated position.”

Police exchanged gunfire and negotiated with Micah for hours at a parking garage in downtown Dallas. During the standoff Micah Xavier also said he acted alone and that the “end is coming.”

Authorities said they had no other option but to use a bomb robot and place a device on its extension for it to detonate where the suspect was.

In the gunfire exchange Micah Xavier Johnson shot over 10 police officers, killed five of them and injured 2 civilians.

Despite the reports of multiple shooters, authorities say it was possible Johnson had carried out the attack by himself.