Winston Beigel is the screenwriter husband of Big Bang Theory star, Melissa Rauch. The two have been together for years and though the hot blonde is whom we get to see on screen, her guy is also in showbiz.

The lucky fella gets to call the comedian and actress his wife but they started as friends over a decade ago.

Melissa Rauch who is famous for her role as Howard’s wife Bernadette in the Big Bang Theory –met her super tall hubby while in college.

Melissa Rauch’s television career spans such hit shows as “The Big Bang Theory,” “True Blood” and “The Office,” as well as “Kath & Kim,” “***** **** Money,” and “Best Week Ever.” Some of her feature film work includes roles in “I Love You Man” and “Delirious.”

Though the couple works in the same industry, they actually met when neither was famous. Winston and Melissa both attended Marymount Manhattan College –from where she received her BFA in acting.

They have even worked together on projects since 2005. Winston Beigel happens to be a writer and after some time dating they ended up walking the isle in 2007. 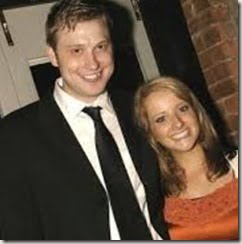 They began with a comedy stage show called The Miss Education of Jenna Bush. The show bagged an award for an outstanding solo show at the New York International Fringe Festival. Other projects they worked on as partners include The Condom Killers and a more recent one is, If We’re Not Married by 30.

They both co-wrote the wedding comedy for the CBS and also teamed up as, co-producer and writer for Sony Pictures Worldwide’s feature film ‘The Bronze.’

Winston might not belong to the popular faces in Hollywood but he certainly is the most important person in the life of Melissa Rauch and he is certainly devoted to her. That became clear after he took her name, hence, he is also known as Winston Rauch.

The couple who’s been married for a decade now, is yet to start a family but that will soon change after the 37-year-old actress announced her pregnancy.

In a candid essay Winston’s hubby shares the happy news with the world, also revealing she suffered a miscarriage the last time she was pregnant.

Check out more photos of Winston’s hot and talented wife on her Instagram here.