Megan Luloff is the school teacher who is grabbing headlines after pulling a rather bizarre and unappropriated stunt in the midst of Halloween celebrations.

Luloff, an elementary school teacher in Iowa, decided to dress as blackface in order to imitate a black female character in the 2004 comedy movie, “Napoleon Dynamite.”

She showed up with her costume to the Walcott American Legion’s “Boos Bash” along with her entire crew, who dressed as characters from the cult classic. Megan Luloff specifically dressed up as the character Lafawnduh –which everyone knows is a black character.

Pictures from the party, made Luloff’s school district to open an investigation and the Iowa-Nebraska NAACP Conference of Branches have issued a rebuke in no uncertain terms. 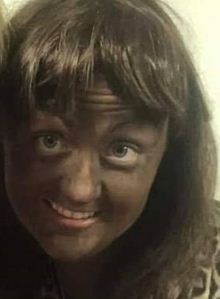 After the images began circulating, many authorities began condemning her actions; Superintendent Art Tate said, the “wearing of blackface is never appropriate in any circumstance by any person.”

Megan is under investigation by the Davenport School District and could be fired. The school board also had a lot to say about the incident in a statement.

Megan Luloff is as far as we know, still a first-grade teacher at Walcott Elementary in Walcott. She had to darken her skin in order to pull off the character’s look from the movie.

According to the Associated Press, Luloff did not respond to requests for comments. Her stunt comes days after journalist and TV host Megyn Kelly was fired over conversations of blackface. Kelly excused during her show the use of blackface Halloween costumes.