Annie D’Angelo is the current wife of singer, songwriter, actor and activist Willie Nelson. She and the country music icon have been married for nearly three decades.

Annie’s husband Willie Hugh Nelson, was born April 29, 1933, in Abbott, Texas. He began performing as a kid and at just 13 years old, Nelson performed with Bob Wills, the inventor of Western swing music.
In addition to a stint in the Air Force, Nelson has worked as a cotton picker, saddle maker, disc jockey and Bible, vacuum cleaner and encyclopedia salesman.
Among his many honors, Nelson was inducted into the Country Music Hall of Fame in 1993 and, for his support of family farms, the National Agricultural Hall of Fame in 2011. 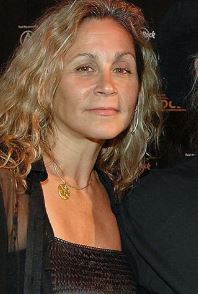 His current and fourth wife is Annie D’Angelo. Annie met her future husband while she was working as a makeup artist on the set of the 1986 film Stagecoach. The movie also starred Kris Kristofferson and Johnny Cash. Other films she worked in include The Rosary Murders, Bachelor Party, Hot Pursuit, Gleaming the Cube and Where the ****’s That God?!

The two tied the knot on Sept. 16, 1991, at Nashville’s St. Alouin Church. Annie D’Angelo and Nelson have since welcomed two sons, Lukas Autrey -born December 25, 1988; and Jacob Micah, born May 24, 1990. Both are also musicians.
Annie is a lot younger than Willie, however her exact age remains a mystery. Following their marriage, Annie D’Angelo left her makeup artist career to become responsible for managing her husband’s career.