Ana Beatriz Boaretto has been identified as the gorgeous mystery woman who was caught in the ride of non other than, Tyga.

The stunner has also been subsequently named the rapper’s new lady love and has become hard not to compare Boaretto’s looks to Tyga’s famous ex, Kylie Jenner. The ex’s actually sparked relationship rumors after they were seen hanging out in a club and at his studio last month following Jenner’s split from baby daddy Travis Scott. However, Kylie clapped back denying any romantic rumors.

According to reports, the new couple were introduced by mutual friends a few months back and have since, hanged out here and there. Since meeting in May, the two have been seen a number of times together. 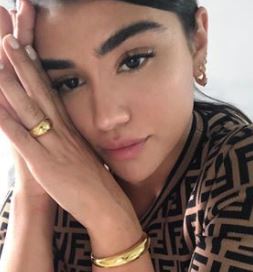 Over the weekend, Tyga was spotted driving in West Hollywood in a red Ferrari. Ana Beatriz Boaretto was in sitting in the passenger seat. Most recently, the two celebrated Tyga’s birthday while aboard a luxury yacht off the coast of St. Barts.

The black haired beauty has other famous musician friends including Chris Brown, in fact, Ana served as a creative director on a music video starring Brown. She aided in the creative direction of Yella Beezy’s music video for “Restroom Occupied,” which featured Chris. Boaretto also appears on a group photo alongside Halsey at the singer’s Halloween party in 2018. Her social media also features several photos with electronic artis, Tjani.
In addition, Ana Beatriz Boaretto makes a living as a model for cutting-edge brands. She’s worked for Set Active, the active wear brand popular among Instagram influencers, as well as the clothing and footwear label Leah Kirsch.

The new girl also has a decent following with more than 33,000 followers on Instagram. Judging by her social media, Ana Beatriz loves to have fun with friends and is also both a cat and dog lover.
Find her on Instagram here.