Ben Affleck and a mystery blonde have been getting cozy in Los Angeles. The newest woman in his life has been seen at least a couple of times with the Hollywood actor/filmmaker.

The two apparently enjoyed a coffee date on Saturday but later moved on to the real deal. The item also hanged out at night when the two left coffee behind and went for the hard liquor.
It is said she was with him when the 47-year-old had a slip with the booze. And there’s also photo proof to go along.

But let’s backtrack for a bit; the pair first made a stop at a local Starbucks coffee house after riding in on his motorcycle. At the time they seamed to really enjoy some nice light conversation as the item looked relaxed.
However, when night falls, is another story. In exclusive photos obtained by the Daily Mail, the blonde beauty is seen escorting a visibly drunk Ben out of a Halloween bash.

The actor had trouble walking and appeared to stumble against a vehicle, suffering a ‘sobriety setback’ after leaving a Halloween party on Saturday night in Los Angeles.
He even had to wrap his arms around his mystery but gorgeous companion while the pair waited for a ride outside of the La Peer Hotel, which played host to the Unicef Masquerade ball.

Ben and Garner sent shockwaves when in 2015 the two announced they were separating. Garner, who reportedly filed for divorce in April –is the mother of the couple’s three children Violet, Seraphina and Sam.
The former couple has kept an amicable relationship with ex-wife Jennifer being at the ready to help Ben in August of 2018. At the time she staged an intervention before driving him to a rehab facility in Malibu.

Since their separation and divorce, he’s been linked to numerous women including, nanny Christine Ouzounian, Lindsay Shookus and Shauna Sexton. 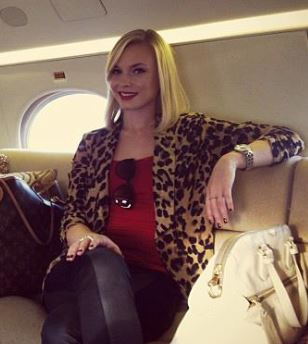 The newest mystery blonde has been identified as musician, Katie Cherry. According to US Weekly, she and Ben met a few months ago on the dating app Raya.

Cherry is not that unknown after all, she has a few connections here and there.
33-year-old Katie was born Kathryn Redino, to parents Richard and Suzy Redino.
She studied film scoring at Berklee College of Music and is currently working as a film composer in Los Angeles. According to her Stage 32 profile, she sings on the track “Black and White,” which was used in the 2015 Wilmer Valderrama drama To Whom It May Concern.
From her social media, we can tell you she was signed to Timbaland Productions, and she also posed for a photo with the music producer in 2012.

She is a close friend of actress, Tara Reid and Cherry actually made headlines in the past when she claimed that she was assaulted and attacked by the Situation’s brother Marc Sorrentino, following a night out in New York City. The incident with Sorrentino took place back in 2010.