Matthew Mills is a 32-year man from Brooklyn who was arrested and later released on bond after he confronted the sister of deceased Sandy Hook teacher Vicki Soto.

Matthew Mills was arrested after he approached Jillian Soto to confronted her with an offensive conspiracy theory that puts the massacre in shady waters.

Matthew Mills allegedly ran a race made in honor of Vicki Soto and later approached Jillian to question her about a portrait showing Soto and her siblings sitting on seaside rocks in Stratford during happier times. Matthew Mills wanted to know if the picture had been digitally altered.

Jillian and other family members were highly offended and repeatedly asked him to leave. According to cops Jillian ended up in tears.

In his defense, Matthew Mills said during a phone interview, he signed up for the third annual Vicki Soto 5K in Stratford, Conn., so he could “politely” ask a question of Soto’s family.

Should we believe him? It is actually not the first time, Matthew Mills gets involved in this type of antics. In 2014, he was arrested for trespassing. 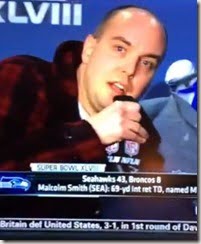 Matthew Mills is a self described “independent journalist’ and a 9/11 truther. He belongs to the 9/11 Truth Movement, which disputes the results of the official investigations into the attacks on September 11, 2001.

It was Matthew Mills who interrupted Malcolm Smith’s post-game press conference after Super Bowl XLVIII. After he bluntly grabbed Smith’s microphone he had this to say:

Investigate 9/11. 9/11 was perpetrated by people within our own government.”

At the time, it was said Matthew Mills was a affiliated with WeAreChange, a “nonpartisan, independent media organization comprised of individuals and groups working to expose corruption worldwide,”

According to its website, Matthew Mills is a journalist and has interviewed Tom Brokaw among others.

In the recent incident, Matthew Mills was booked for breach of peace and released on bond pending a court appearance later this month, according to the NY Daily News.