Mathew’s partner took office last June and made history becoming Ireland’s youngest Prime Minister at 38-years-old. Leo Eric Varadkar was born January 18, 1979 in Castleknock, Dublin, Ireland. He is the son of a doctor from Mumbai who married an Irish nurse he had met in Britain.

He attended Trinity College in Dublin, where he studied medicine. Although a qualified doctor, he became a councillor in his early twenties and has been a full-time politician since he was first elected to parliament in 2007. Since then, he’s held several cabinet posts, most recently minister for social protection. 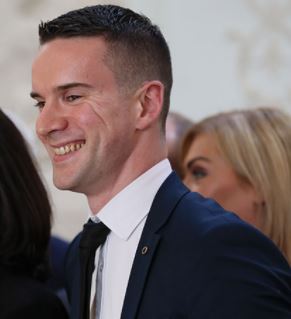 The leader of Fine Gael, went public about his sexuality a few months before a landmark referendum in 2015 in which Ireland became the first country in the world to vote in favour of same-*** marriage in a referendum.

The Taoiseach and boyfriend Matthew Barret have been in a relationship for the last three years or so. The couple has been together since around 2015. They are pretty serious as according to the Independent, the couple have holidayed together, met each other’s families and even shared a joint birthday bash. The two share a common interest in keeping fit and go on regular runs and hikes together.

Matthew Barrett as well as Varadkar’s parents were present during his speech as Taoiseach, last year.

Mr Barrett, is a cardiologist based in Chicago. He previously worked in the cardiology department at St Vincent’s Hospital in Dublin where he is highly regarded for his work as a specialist registrar.

He decided to head to the U.S. in order to further his medical education, the Sun reported.