Courtney Laine Mazza is the **** wife of actor and TV personality Mario Lopez. She is his second wife and the two have been married for several years.

Courtney’s husband gained fame on Saved by the Bell then moved onto other endeavors such as Dancing with the Stars and MTV’s America’s Best Dance Crew. He later reprised his role in Saved by the Bell: The New Class.
In 2016 he portrayed Vince Fontaine in the Fox broadcast of Grease Live! The California native born October 10, 1973; wrestled for his high school and competed in the California State Tournament before becoming interested in acting. This also helped his famous role as A.C. Slater on Saved By The Bell.

Lopez who’s been active in showbiz since, has been married twice -he and Ali Landry became hitched in 2004, however she annulled their nuptials after she discovered he had cheated on her two days before their wedding. In following years he was romantically linked to Karina Smirnoff. 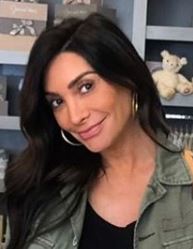 Courtney Laine Mazza was born October 13, 1982; a Pittsburgh, Pennsylvania native is often described as a Broadway dancer, actress and producer though she is mostly known for her association to Lopez.
Courtney -a classically trained musical theatre actress, has performed in multiple Broadway hits such as John Waters’ Cry Baby, Disney’s The Little Mermaid and A Chorus Line. Lopez was also in the Broadway national tour of Thoroughly Modern Millie.

The stunning brunette and mom of three hasn’t shared many details about her childhood and since getting married she’s become a dedicated wife and mother.
Prior to starting a family, in 2006, she had a part in a film called Pittsburgh. She later appeared on Luke Matheny’s comedy Earano, and in 2017, starred on the t.v. series SLove & Salsa.
Other work includes co-hosting the entertainment news show Extra which Mario hosts normally. Husband and wife are also the co-hosts of his Premiere Networks’ syndicated radio show ON with Mario Lopez.