Maria Ressa is a Filipino journalist who has been, among others, named Times Person of the Year.

The 55-year-old is also an author, CEO, businesswoman and expert on global terrorism. Born in Manila, Philippines; she began her career as a war zone correspondent –planning coverage when one side is shooting against the other side.

According to the Sea Globe; shortly after martial law was declared in the Philippines in 1972, Ressa’s family migrated to the US. She graduated from Princeton University but went back to the Philippines in search of her roots in 1986.

In 1987, Maria co-founded independent production company, Probe. However, she turned to investigative reporting; becoming a researcher, foreign correspondent, and ultimately the senior vice-president of a major TV station. Between 1987 and 1995 she was CNN’s bureau chief in Manila, before moving to Jakarta for CNN between 1995 and 2005. 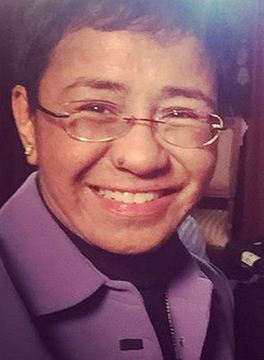 Her career in journalism spans for over three decades having held several roles. In 2005, she managed ABS-CBN News and Current affairs, the largest multi-platform news operation in the Philippines. Ressa is also the author of two books, “Seeds of Terror: An Eyewitness Account of al-Qaeda’s Newest Center of Operations in Southeast Asia” and “From Bin Laden to Facebook”

In 2012, Maria Ressa co-founded the news site Rappler –one of the leading online news organizations in the Philippines. She serves as CEO and Executive Editor of Rappler.

In addition, she also taught courses in politics and media for her alma mater, Princeton University, and in broadcast principles at the University of the Philippines.

Ressa who is not married, keeps active on social media; on Instagram she describes herself as an “Idealist. Cynic. Pragmatist. Journalist. Author.”

As you may imagine, she has been honored with numerous awards around the globe, however, the veteran journalist and former CNN bureau chief –has faced most recently, what is believed –political motivated charges by the Philippine government. Earlier this month it was reported Ressa posted bail for charges of tax evasion. She is expected to be arraigned February next year.