As previously reported, the body of Kiersten Cerveny was found on Sunday at a Chelsea Apartment Building. After an alleged night out partying she was left by two men at the building’s lobby. The wife and mother of three is now believed to have lost her life due to a drug overdose.

Marc Johnson and Kiersten were so close, he is the one believed to have called 911 and then fled the scene. According to the NY Daily News, the TV producer has spent the last few hours being questioned by the NYPD.

His Facebook can be found under Marc Henry Johnson, where it says he is the President and Producer at MHJ Productions. 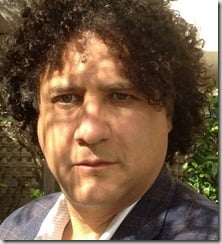 According to his website, Marc Johnson has produced or executive produced television and films for Michael Moore, Spike Lee, Mario Van Peebles, and Danny Glover.

Marc has won awards ranging from a Peabody to Dramatic Jury Prize at Sundance. His works have been broadcast on PBS, Starz, Logo, Channel 4, TBS, Trinidad Tobago Television, The South African Broadcast Corporation, and The Sundance Channel.

His social media states Marc is an Executive Producer for the concert film/documentary entitled SOUNDTRACK FOR A REVOLUTION.

Mr. Johnson is a Producer on BROTHER TO BROTHER which won the Dramatic Special Jury Award at the 2004 Sundance Film Festival, was nominated for four Independent Spirit Awards, and three Gotham Awards. Also in 2004, Mr. Johnson is the Producer for the Sundance Channel-Court TV co-production, THE FIRST AMENDMENT PROJECT: POETIC LICENSE.

Most recent reports on Mrs. Ceverny’s death investigation indicate, she and Marc Johnson were partying at the apartment of his alleged drug dealer, 60-year-old James (Pepsi) Holder.

The two men dragged her to the lobby to put her in a cab but when she turned “blue” Holder took off while Marc Johnson stayed until help arrived but was long gone when cops got there.

Marc Johnson is a married man and has lived on Laight St. for about 10 years. His wife is lawyer, Marlisa Vinciguerra.