Manuel Franco is the lucky dude who just became an overnight millionaire after hitting the Powerball jackpot worth $768 million.

The jackpot is the third-largest behind the world record $1.6 billion Powerball jackpot shared by winners in California, Florida and Tennessee in January 2016 and a $1.5 billion Mega Millions jackpot won in South Carolina last October.

The 24-year-old Wisconsin native stepped in today to claim what is rightfully his. Manuel Franco of West Allis said he was sorting through $10 worth of quick-pick tickets after the March 27 drawing and thought he had checked all his tickets.

Then he saw one last ticket stuck to another one, realizing he matched the first two numbers, then glanced at the Powerball to see it matched too. He told reporters recounting the moment

“I was going insane” “My heart started racing, my blood started pumping, I felt warm. I started screaming” 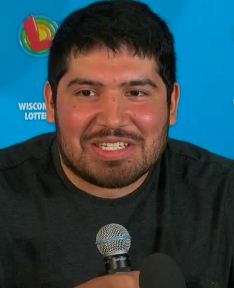 Franco who kept really mysterious about his life before becoming a millionaire said he is not worried about people coming at him asking for money because he knows how to say no. Though he didn’t disclosed what he did for a living he did admitted to quitting his job on the second day he learned after his winning ticket.

During the press conference he said he would take a lump sum payment and that he hoped to make some charitable contributions.

As for his future, Franco said “I’m not sure what the next chapter is gonna bring for my life, but I have been setting up the best legal team,”

The winning ticket was sold on March 27 at a Speedway gas station in the Milwaukee suburb of New Berlin. The $768 million prize refers to an annuity option paid over 29 years. The winner also can choose a $477 million cash option. The gas station will receive $100,000 for selling the winning ticket.