Manon Duma is the girlfriend Gabriel Bascou, the French national who was randomly attacked and nearly killed in a Harlem street on Valentine’s Day.

Manon and her French beau were stepping out from an Ihop restaurant when out of nowhere a total stranger ran up to him and slashed his neck with a knife. The loved up couple were walking on a Harlem sidewalk in broad daylight when the horrible incident took place.

Video of the incident shows Bascou kneeling on the sidewalk with blood gushing from his neck -while girlfriend Manon Duma and cops come to his rescue.
According to numerous reports, an ex convict identified as Khalief Young is accused of slashing 27-year-old Gabriel Bascou in the neck on Valentine’s Day just as he and his girlfriend were walking on the near West 132nd Street.
Bascou who had his throat slit from the violent attack, was rushed to Harlem Hospital where he received a tracheotomy and was intubated. 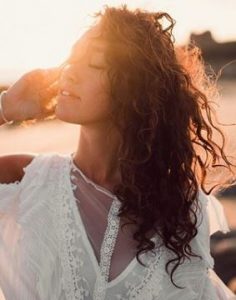 Bascou who had landed from France the night before, wrote on social media -he was “I didn’t see anything coming, he didn’t steal anything from me,” “Just a gratuitous blow of absolute violence.”

From his social media we get that Gabriel is a Photographer & Content Creator based in Paris. He is a ambassador for @scotch_official and is the co-founder of The French Way Co-a page with over a tousand followers where he and other content creators share their material.
Gabriel who also has his own website, shares that he is originally from Montpellier. It also says that he first took on Photography as a hobby and later made it his vocation.

Manon Duma who is also French is a model and free lance graphic designer currently based in New York. The curly haired stunner told media she was still frightening following the attack to her boyfriend. The young woman also hails from Montpellier, France.

According to her LinkedIn, Duma holds a Communications and Marketing degree from ESG Ecoles de Commerce and a Master in Digital Marketing from Digital Campus Montpellier. She worked as a communication assistant at LiloPro back in 2016 and later in digital marketing for Digital 113 from 2017 until 2019.