Malandra Burrows was the girlfriend of now late producer and entertainer, David Gest, who was found dead in a London hotel.

Gest, who is the former husband of singer Liza Minnelli, died at the Four Seasons hotel in Canary Wharf, sources have confirmed.

Reports say, David was planning to tour the UK in July with his latest show, called the David Gest Is Not Dead But Alive With Soul Tour! Bofore death surprised him on Tuesday, April 12.

Malandra’s boyfriend, was born on May 11, 1953 in Los Angeles, California. He worked as a music video and television producer.

One of his biggest successes during his career was producing the highest-rated music special in US music history – 2001’s Michael Jackson: 30th Anniversary Celebration. David was a childhood friend of Jackson and his brother Tito.

David Gest was perhaps best known for being the estranged husband of singer Liza Minnelli. They were married in 2002 but were separated the following year and officially divorced in 2007.

In 2006 he appeared on ITV’s I’m A Celebrity Get Me Out of Here, finishing in fourth place.

He later became a judge on talent show Grease Is The Word and in January he appeared on Celebrity Big Brother in the UK. He was a well known figure in Hollywood and also in the UK.

In 2011, David produced and directed the Soulicious tour with Sir Cliff Richard.

According to police, there are no suspicious circumstances, surrounding David’s death. Back in 2007 he was rushed to the hospital due to chest pain. He also made an early exit from Celebrity Big Brother house due to health issues. He and English actress Malandra Burrows began dating after their paths crossed on I’m a Celebrity…Get Me Out of Here. She was 12 years his junior. 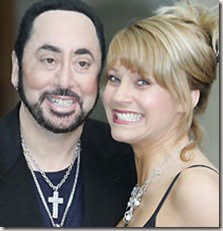 Malandra Burrows was born November 4, 1965, in Woolton, Liverpool, Lancashire. Her parents, Malcolm and Sandra, combined their names to come up with Malandra.

The 50-year-old actress and singer is best known for her role as Kathy Glover in the ITV soap, Emmerdale –a role she played for 17 years.

Malandra Burrows studied dancing as a child. She won the TV talent show New Faces in 1974, becoming the youngest winner at that time. As a singer she’s had relative success with her

She appeared on the reality TV show, I’m a Celebrity…Get Me Out of Here! In 2006, she also took part in Channel 5’s The All Star Talent Show.

Malandra and David were first linked together after they were photographed in 2007. After the pair began dating David told friends:”I’m in love – and I hope to have children very soon.”