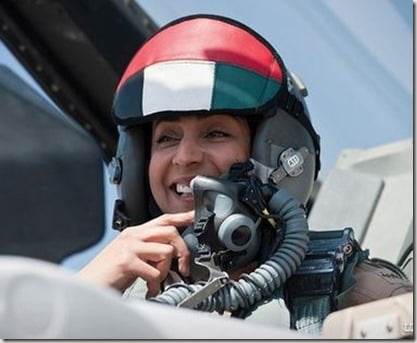 It’s been proven through out  history women can really do it all; a great example of that is Mariam Al Mansouri who has been reported as the United Arab Emirate’s first female air force pilot. How’s that for women’s revolution!
Media reports say the 35-year-old led the airstrikes against the Islamic State (also called ISIS or ISIL) targets earlier this week. 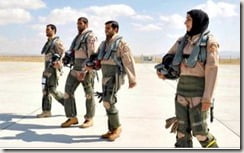 An Abu Dhabi native who holds an undergraduate degree in English literature. Al Mansouri was among the first women to join the UAE Air Force academy when it finally allowed female members and she graduated in 2008. 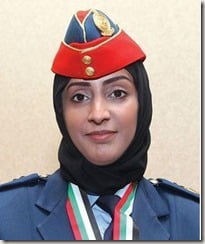 She  is one of eight children in the family; her younger sister Aisha Al Mansouri is a qualified A320 first officer and her brother Ali, is a helicopter pilot for Abu Dhabi Police.

Mariam dreamt of being a pilot as a teenager, but only joined General Command in 2007, when top brass announced that female recruits can be accepted for training at the Khalifa bin Zayed Air College. Now, she commands a squadron of F-16 jets which carried out attacks on Islamic State (IS, formerly ISIS) positions in Iraq and Syria.

It is not the first time she gets media attention, In May, major won the Pride of the Emirates Medal. She is said to be focused on “competing with herself” to improve her work, instead of trying to rival with her male colleagues, according to Deraa Al Watan magazine.

“It was my aspiration,” “Ever since I finished high school, I wanted to learn flying because it was something that I liked in the first place.”

She graduated from high school with a 93 per cent grade average before joining UAE University for a BA in English literature. Major Al Mansouri said it was her love for the UAE and her passion for challenge and competition that drew her to the field of aviation.

She first spend several years working for General Command and when the perfect opportunity came she didn’t hesitate on following her dream to join the air force when the academy finally opened its doors to female recruits.

During her studies and career, Major Al Mansouri has met several notable figures, including Sheikha Fatima bint Mubarak, the Mother of the Nation and widow of the founding President, Sheikh Zayed among other dignitaries.

What words of encouragement would you tell her? It’s been also said the attractive woman has been fighting marriage proposals ever since photos of the trailblazing flying ace went viral!