Ben Schramm is the boyfriend of Madeleine Westerhout -who until recently served as an executive assistant of President Donald Trump -has been kicked out of the White House.

The 28-year-old brunette allegedly shared information of the Trump family with reporters at an off-the-record dinner -reason why Trump is getting rid of her.

Born Madeleine Elise Westerhout on October 8, 1990; the Newport Beach, California native graduated at the College of Charleston in Charleston, South Carolina, receiving a BA degree in political science in 2013.
Prior to her career in politics, she worked as a part-time fitness instructor in the Pure Barre gym of Carrie Rezabek Dorr at West End location in Washington, DC.

She began her career working for the 2012 presidential election; Mitt Romney campaign. The following year she worked for candidate John Kuhn in the Republican primary for the special election in South Carolina’s first congressional district. 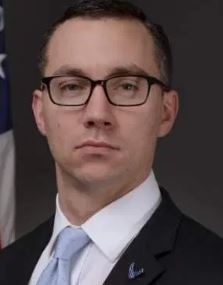 Later that year, she was an intern for Congressman John Campbell. Westerhout began working for the Republican National Committee(RNC) and the Republican Party Organizing Committee in the summer of 2013. In 2015, she worked as an assistant to RNC chief of staff Katie Walsh which led to her working with Donald Trump’s transition team.

She went from being Trump’s secretary to being named the Director of Oval Office Operations at the White House. In January, it was announced that Madeleine Westerhout would be an executive assistant to President Trump. But all that seems to be in the past now.

Madeline seems to be in a relationship with a fella named Ben Schramm -who works as the Director of Strategic Engagement at the Office of the Secretary of the Air Force. Ben who is a Maryland native, previously worked as a special assistant at the Office of the Assistant Secretary of Defense for Legislative Affairs, at the United States Department of Defense.
He attended Georgetown University from 2004-2008 for his collegiate experience. During his time at Georgetown, Schramm was a Division I rower.

Madeline and Ben Schramm have been an item for the past three years. She has shared many photos of the couple on her social media.