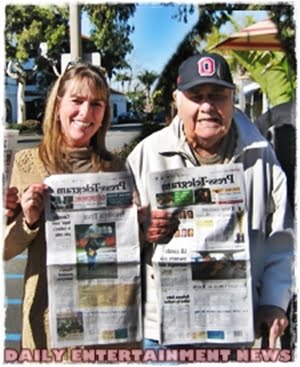 Lucinda Winters has lost her father and for the rest of us we’ve lost a legendary comedian that will keep living in the mind of those who touch their lives with his amazing humor. It was reported the American comedian past away last night at 87 years old.

Lucinda who is his only daughter is 57 years old, she was born in July 7th 1956 to her father Jonathan and mother, Eileen winters. Lucinda’s mother past away in 2009 at the age of 84 after a long battle of breast cancer. She has an older brother, Jonathan H Winters IV who was born in 1950 and who is a contractor he is married to Naomi Cools Winters, 56.

Her parents met at Dayton Art Institute and married in 1948 allegedly only a month after meeting but you know how it was back then! She was born Lucinda Kelley winters and she became a talent scout for movies.

Just to remember a little about Lucinda’s great comedian of a father we’ll tell you something about him. After Jonathan’s parents divorced , he and his mother moved to Springfield where his grandmother lived. There his mom got remarried and became a radio personality. After being discharged he transferred to Dayton art institute where he met his wife. Jonathan got his start in show business by winning a talent contest. This led to a children’s TV show in Dayton in 1950. This led to a game show and a talk show.

Following his personal quote: “If your ship doesn’t come in, swim out to it”

He decided to move to New York City with his family and because of his natural talent within two months he was getting night blub bookings!

Winters died last night of natural causes in Montecito, California, around 6:30 p.m., surrounded by friends and family. His Maude Frickert character made him famous, the seemingly sweet old lady with a quick and acid wit.  He also starred in one of the best comedies ever “It’s a Mad, Mad, Mad, Mad World.”

I’m positive his father talent and skills inspire his daughter as she participated in two TV films; She appeared in one episode of “This is your life” playing herself and “Certifiably Jonathan” in 2007. The storyline in certifiable Jonathan tells the story of a famous comedian and artist wants to display his work at an art museum. Just when he thinks he’s lost his touch, a series of famous comedians drop by to help him rekindle his artistic and comedic spark.

Lucinda Kelley Winters became Lucinda Varner after she got  married to John Varner. She attended The San Diego Sate University-California State University from 1975 till her graduation in 1980. She is currently the president at Location Plus at the Santa Barbara California area.

Rest in Peace, Mr. Winters and thanks for putting a smile on us!