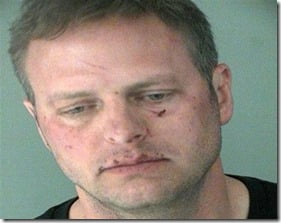 A little funny you can’t argue that, I mean what are the odd! Of all charges huh! “The head of  the Air Force’s Sexual Assault Prevention and Response Program” charged with precisely sexual assault! But don’t worry Krusinski has reportedly been removed from the Sexual Assault Prevention and Response Program. He had it coming I mean you don’t mess with the Air Force Lt.

Ok, but to get this far in his career and fall from grace like that there has to be more to the story right! Allegedly a drunken Krusinski was picked up by the cops early Sunday morning in a Crystal City parking lot:

“A drunken male subject approached a female victim in a parking lot and grabbed her breasts and buttocks,” according to a Arlington County Police Department crime report. “The victim fought the suspect off as he attempted to touch her again and alerted police.”

Krusinski was born October 28, 1971. The 41 year old groped the woman and tried to touch her a second time but she was able to fight him and called 911; the indecorous incident took place only blocks away from his apartment in Crystal City, Virginia.

Lt. Col. Krusisnki is originally from Fairfield, Ohio and graduated from Fairfield Senior High school and joined the United States Air Force Academy in 1990 obtaining a BS in Psychology, graduating in 1994. The difference is incredible from his mug shot above right! It wasn’t immediately clear why Krusinski had the cuts and bruises on his face in his booking picture; could it be from the fighting during the sexual assault??

From 1995-1997 Krusisnki gained a MS in Engineering Systems Management from St. Mary’s University and from 2006-2007 another Master of Science in Logistics Management from the U.S Air Force Institute of Technology. Krusinski is an Afghanistan war veteran, and he was commander of  the Sixth Force Support Squadron at MacDill Air Force Base in Tampa. He was named Force Support Field Grade Officer of the Year in 2009.

No doubt a brilliant guy but that made a stupid decision. Jeffrey Robert Krusinski we think is married to 40 year-old Cheryl Masanek Krusinski.

The Air Force officer, booked on suspicion of misdemeanor sexual battery, posted a $5,000 bond and just  like that Lt. Col. was released.

You can read more about his skills and expertise here.

So far there is no mention about Lt. Col. Jeffrey Robert Krusinski accuser, and there is a chance her name won’t be revealed, what do you think?