Louis and Juditha Brown are the parents of late, Nicole Brown Simpson. Their eldest daughter was married to former NFL star O.J. Simpson, who was charged with murdering her and a friend, Ron Goldman, at her L.A. home on June 12, 1994.

Louis Hezekiah Brown Jr. was also the father to daughters; Margit and Wendy and sons; Rolf and Tracy –from a previous marriage.

He lost daughters Margit, who passed away after a long illness March 8, 1989, and Nicole, who was killed on June 12, 1994 –becoming forever connected to one of the most notorious trials of the late 20th century.

Louis, born in Havana, Kansas on August 10, 1923, died July 3, 2014 with his family by his side. several obituary’s say. Louis Brown Jr. died at age 90 after a long battle with Alzheimer’s disease.

Nicole Brown Simpson’s father became an Army Air Force Captain flying B-17 bombers at the age of 21 during WWII. After the war, he flew photo missions to North Africa, Spain and other countries to document the aftermath. After his honorary discharge, Louis Brown was hired by Stars and Stripes Publications in Darmstadt Germany –where he met second wife, Juditha Brown.

Louis married Juditha Baur in Zurich, Switzerland on July 14, 1956. Their daughters Denise and Nicole were born in Germany, and daughters Dominique and Tanya were born in the United States. 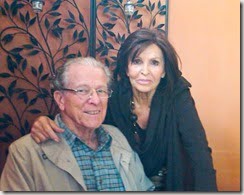 Their daughter Nicole Brown married former NFL great O.J. Simpson in 1985, but filed for divorce in 1992 after years of abuse. From her marriage to Simpson, Louis and Juditha Brown became grandparents to Sydney and Justin. After her divorce, Nicole told her mother at one point,  “I’m scared,” due to a paranoid Simpson, following her around.

The family was left heartbroken after O.J. was acquitted of all charges in October 1995. Though they found some vindication in February 1997, when O.J. Simpson was found liable for the wrongful deaths at the conclusion of a civil trial.

After the death of his daughter Nicole, Louis founded The Nicole Brown Simpson Charitable Foundation, which was established to assist victims of domestic violence.

Louis and Juditha Brown were married for 58-years.