Louis Aliot and Le Pen have been in a relationship since 2009. He currently serves as the Vice-President of Marine’s far-right Front National party.

Both Aliot and Le Pen were in previous marriages and do not have any children together.

Louis Aliot was born 4 September 1969. His interest in politics came to him during his studies in Toulouse where he obtained a DEA in political science and a doctorate in public law. He is a civil lawyer, specialist in public law, notably in constitutional law.

He has been associated with the National Front since 1988.

A lawyer by profession, he was elected regional councilor of the Midi-Pyrénées in 1998 and represented the department of Haute-Garonne during six years. 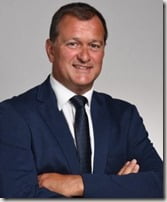 In May 2001, Jean-Marie Le Pen appointed him coordinator of his presidential campaign alongside Bruno Gollnisch, and from 2002 to 2010 he would be a member of Jean-Marie Le Pen’s cabinet. In 2004, he became parliamentary assistant to Marine Le Pen.

In 2005, he was appointed general secretary of the National Front. From 2008 until 2009 he served as municipal councilor of Perpignan.

On May 2, 2010, he left his post of secretary-general to support the candidacy of Marine Le Pen to head the party. As part of the 2012 presidential campaign, he was appointed operational director of Marine Le Pen’s campaign. 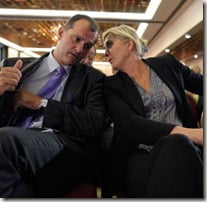 Needless to say, Louis Aliot has been key in the political rise of Marine Le Pen; they have worked together closely for years which most likely resulted in their romantic relationship.

They made their romance formal in 2010 after they bought a home together.

Marine Le Pen has been married twice. She is the mother of three children with her first husband, Frank Chauffroy –with whom she was married from 1995 until 2002. She was married to second husband, Eric Lorio from 2002 until 2006.

Louis Aliot, was also in a previous marriage and subsequently got a divorce. He and his ex-wife, became parents of two children.

Find more interesting facts about Louis Aliot in the link below.