Lori Harvey is a model and media personality known as the stepdaughter of actor, comedian and TV host, Steve Harvey.

The stunning 22-year-old is now making headlines of her own, however not for prefesional reasons. Lori’s personla life appears to be getting that much attention, specifically the attention of 49-year-old P Diddy.

According to reports, Lori was initially interested in Combs’s son Justin Combs and the two were an item for a while. Then she was in a relationship with Trey Songz for a while and is now allegedly dating the older Combs.
Check out interesting facts about her. 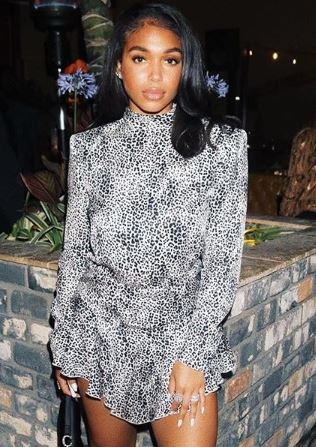 Lori Harvey has been described as a “rising star” in the modeling world, breaking out during a 2017 runway walk for Dolce & Gabbana. Since then she has graced the catwalk at several D&G shows, despite being just 5’3″ -a lot shorter than most traditional runway models. This has made her a bit of a role model for women who are not super tall and skinny.

#3 She has been linked to a number of men

At the beginning of 2019 Lori was said to be in a love triangle with Trey Songz, Future, and Justin Combs. In additiont she’s been linked to race car driver Lewis Hamilton.

#4 She was previously engaged

Lori Harvey was previously engaged to famed Dutch soccer star Memphis Depay. Depay plays for the French club Lyon and the Netherlands national team. The two announced their engagement in June 2017 but quietly went their separate ways later that year.

The beauty got a name drop from Meek Mill in his song, “Going Bad.”

#6 She had dreams of becoming a professional equestrian

Harvey’s dream of riding horses professionally tragically ended at the age of 18 when she was thrown from a horse during a 2015 riding competition in Lexington, Kentucky. Lori who at the time attended college in Florida to continue competing, switched to online classes after breaking her back and tearing her MCL.

#7 Reports say she and Diddy are just family friends

Dating rumors between the two began after they were seen walking around SoHo in matching outfits on Wednesday night. Apparently sources say the music executive and Lori have been spotted on various trips and rendezvous with one another.