Dieter Rausch is the husband of Linda Tripp -a former Pentagon staffer widely dubbed as the whistleblower in the Clinton-Lewinsky scandal.

Dieter’s wife is the woman who secretly recorded former White House intern Monica Lewinsky as the then 22-year-old revealed how she and then president Bill Clinton had engaged in a physical relationship; and then told the world about it.
She turned the tapes over to then-Independent Counsel Kenneth Starr in exchange for immunity from illegal wiretapping charges.
As you may recall, many describe Linda as the woman who pretended to be Lewinsky’s friend only to snith on her and Bill Clinton -which ultimately led to Bill’s impeachment in 1998.

At the end of the Clinton administration, Tripp was fired from the Pentagon where she was a civil servant in the public affairs office.

Linda Tripp now goes by Linda Rausch following her marriage to Dieter Rausch in 2004. The actually met as young kids, when Linda visited his grandparents in Germany. They wrote letters to each other as youngsters but lost track of each other as they pursued their careers. They reconnected around 2000. 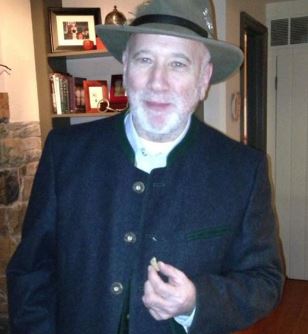 Dieter Rausch is originally form Germany. Following his wedding to Tripp, the couple settled in Virginia.
Dieter Rausch is an architect by profession, however he and his wife run, The Christmas Sleigh shop. Dieter who was born just outside of Frankfurt, had a successful thirty-year career as an architect in his native country.
Following his move to the US, the couple opened The Christmas Sleigh shop in November of 2001. Over a decade later, the Christmas store is still thriving. The store is one of if not the most visited store in Middleburg, being embraced for its singular merchandise and amazing selection of collectibles that are not easily found elsewhere.

Dieter Rausch -who has been featured in a number of magazines to talk about the couple’s shop; is in charge of purchasing items for the store.
He travels to Germany at least three times a year to attend trade shows. He also attends toy and clothing fairs before he sends two containers back to the United States every year.

Linda is the mother of two, Ryan and Allison Tripp; daughter Allison Tripp studied Economics at Radford University and is a Realtor at Middleburg Real Estate – Atoka Properties. She is married to Thomas Foley.