Lili Albrecht has idetified herself as the girlfriend of Nathan Cirillo, the 24-year-old soldier killed yesterday in Ottawa by a heartless gunman.

According to news outlets, she says she met Cirillo in June on an online dating site, and had only met him a few times in person. Albrecht who is originally from France but has been living in Ottawa for almost a decade, said during an emotional interview that her boyfriend had a “big heart, the best father and the best son you could have.” The blonde spoke about the kind of person he was as she attempted to get some closure by saying goodbye at the place where he was killed.

The blonde spoke about the kind of person he was as she attempted to get some closure by saying goodbye at the place where he was killed. Admitting she’s been like a “zombie” she reveals she is having trouble to sleep, eat and constantly looks at her phone hoping to get a text form him.

At one point she breaks down, saying she tries to be strong but it’s “hard;” she  also shared the last time she saw him saying


“When I saw him on Saturday he showed me his new uniform, and he’s like, ‘Hey look that’s what I”m going to wear.’ He was proud to wear that uniform and to stand here for his country,”

Albrecht says the pain has been “indescribable.” “I never thought I could have lost him that quickly. We had big plans, and everything was just blown away in seconds,” she said.

A handsome Cirillo, was a resident from from Hamilton, Ontario he was a standing guard at the War Memorial at the time of his death.  As the terror sparked yesterday in Canada, Cirillo has been mourned around the world, he died honorably serving his country. Fear and many questions still invade the Canadians. Following the multiple shootings, and getting pass the shock just to learn how to cope with the shocking loss of someone they love. His parents, his friends, his girlfriend, his nation, they all wonder still what went wrong. We cant imagine what they are all going through. Nathan was a reservist with the Argyll and Sutherland Highlanders of Canada. According to a reports from CHCH Cirillo had also served in Afghanistan. Nathan was not only a soldier, a son, a human being, he was also one extremely proud dad too. Every time he talked about his son, his smile would be ear to ear, according to high school friend, Jenn Ainscow. Those close to him say he would light up every time he spoke about his little boy, Nathan was the father of a five-year-old boy. He was raising his son with the help of two sisters. Reports say his mother and girlfriend has been flown to Ottawa by the military. Our condolences to all of his loved ones.

A Facebook page has been created in his memory. Dont miss Lili below. 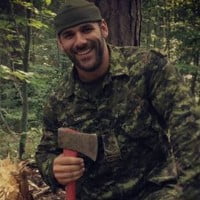