It’s been only two months since the shocking split between Liam and wife Miley Cyrus after tying the knot less than a year in 2018 and having dated on and off again for almost 10 years.
Shortly after calling it quits with Liam, Miley moved on with Kaitlynn Carter, and now she’s dating Cody Simpson.

Is no surprise then that the 29-year-old Australian is also moving on. He and Maddison Brown were spotted out on a date with Brown. In pictures obtained by E! News, the duo were seen smiling as they headed into NYC’s subway ahead of a day exploring the city. According to TMZ, Liam and the 22-year-old actress walked hand-in-hand through the West Village before stopping at Sant Ambroeus coffee bar. 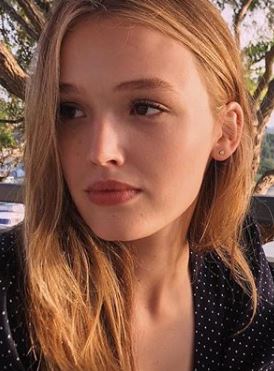 Maddison Brown was born April 23, 1997; she happens to be a fellow Aussie however, she left her native country to pursue modeling and acting.
The blonde began her career at 16 when she relocated to New York for modeling gigs. At the time she stayed in model apartments and AirBNBs by herself.
Brown appeared in Miu Miu’s Fall/Winter 2015 campaign, shot by Steven Meisel. She told WWD that working with the renowned photographer was “one of my ultimate career goals.” She also walked runways for brands including Calvin Klein, Jason Wu, and Phillip Lim, according to i-D
After years of modeling she wanted to return to her childhood love of acting so she headed to LA for auditions. She has since successfully transitioned to acting.

Brown can be seen on the Dynasty reboot. In the CW’s 2017 reboot of the drama Dynasty, 22-year-old Brown plays Kirby Anders, daughter of the Carrington family’s butler Joseph Anders (Alan Dale). Her role began during season two and will continue into season three.

Her first role was in the 2004 television movie, Go Big. She didn’t return to the screen until 2015, when she starred in the film, Strangerland as Nicole Kidman’s character’s daughter. In 2016, she was in seven episodes of the Australian television program, The Kettering Incident.

Will she and Liam last?