Meet Leonard and Shirley May Simmons

Leonard and Shirley May Simmons are the parents of fitness guru Richard Simmons.

Their famous son, recognized by his bushy hair and trademark exercise shorts and tank top, as well as for his humor and enthusiasm, recently explained his absence of almost two years.

Richard, denied rumors that he’s been kidnapped and held against hi will and said during a phone interview, “I have really just been taking it easy, staying at home, working out in my gym and doing the things I haven’t done in a very long time.”

Born Milton Teagle Simmons, to Shirley May and Leonard Douglas Simmons, growing up in the French quarter of New Orleans, where lard was a food group and dessert mandatory, Richard weighed 268 pounds when he graduated high school. His own struggle with weight loss led him to find his passion in life.

The creator and founder of Slimmons Studio, put to rest several rumors that his staff had taken over his money and that he had been avoiding the public eye due to weight gain, saying:

“The people that surround me are wonderful people who take great care of me.”

Richard –who has helped ‘millions of overweight men and women lose weight with his 65 fitness videos and nine books –also added no one should worry about him.

Simmons’ success in the fitness world led him to numerous local and national television and radio appearances including a four-year run on “General Hospital”, followed by his own nationally syndicated series, “The Richard Simmons Show”. The show ran for four years and received several Emmy Awards. His house alone is worth $10 million. 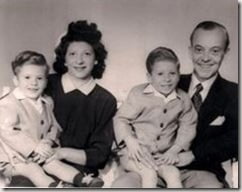 Oh how I loved Leonard Douglas Simmons. He was the most enchanting and wonderful man I’ve ever known. He was so proud of my brother and me. He was proud of the successes we’ve both had in life. Dad, I know you’re looking down from Heaven. And I want to say to you…Happy Father’s Day. And thank you for being the best dad a boy could ever have.

We are glad to know the 67-year-old advocate is said to be doing just fine.