Leila Aquino is the mother of a two-year-old baby girl who died after a fire ripped through an apartment in Brooklyn.

The body of her toddler daughter was found hours later after the fire was put out. It is believed by authorities that Leila Aquino left her baby home alone while she was working.

Firefighters had no idea 2-year-old Kalenah Muldrow was inside the house until Aquino came and notified them their daughter had been there the whole time.

Accoridng to a neighbor, Leila Aquino came home to the tragic scene and seamed distraught, saying “where’s my baby, I just want to find my baby.” 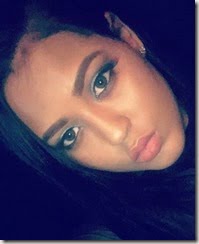 Police found Leila Aquino came home carrying $980 in her purse. The amount was all in $1 bills, allegedly tips she had earned from her job. Leila Aquino works as a striper at a gentleman’s club, sources said.

Once she realized her baby daughter was dead, Aquino collapsed crying. Her initial statement was that she left her daughter with a baby sitter but the sitter denied the claims saying she had actually stopped working for the former mom of one because she was unable to pay her.

20-year-old Leila Aquino later admitted the harsh truth, revealing she had been working at a strip bar overnight. The pole dancing gal, was charged with reckless endangerment and endangering the welfare of a child.

Reports say the fire broke out shortly before 7 a.m. Tuesday at the home on Monroe Street in the Bedford-Stuyvesant neighborhood. The body of little Kalenah was found unresponsive under a bed, where is believed the terrified little girl tried to hid from the flames.

According to ABC7ny, Kalenah’s father stood outside the building in disbelief. Kason Muldrow identified as the victim’s father, told reporters “I’m just here just like a dream, it’s like a nightmare, like a nightmare to me.”

Accoridng to her Facebook page, Leila Aquino was born May 25, 1995. She is from Brooklyn, New York. Her nickname is IGlilybadass and under the about section she writes “Patron Mami, I sin, but I’m no, I’m good, but I’m no.” She has over a thousand followers on FB.

Fire officials suspect the blaze started because of a portable heater that was left on in the apartment.