Ploenta Mendelson is the loving wife of legendary TV producer, Lee Mendelson -who died on Christmas day at age 86.

Ploenta’s husband was the TV producer behind more than 50 animated TV specials featuring Charlie Brown and the “Peanuts” gang. According to reports, Mendelson died at his home in Hillsborough, Calif., after a long battle with cancer.

The San Francisco native born on March 24, 1933; graduated from Stanford University in 1954 with a degree in English. He became involved in radio and TV while serving in the Air Force after college.
He began his career in local TV as a producer for San Francisco’s KPIX-TV in 1961. Lee Mendelson Film Productions opened its doors in 1963. In 1970 Mendelson co-created the live-action children’s program “Hot Dog” for NBC that was billed as a kid-friendly version of “Laugh-In.” He then teamed with “Garfield” creator Jim Davis to produce the first animated short featuring the grumpy cat in 1982. 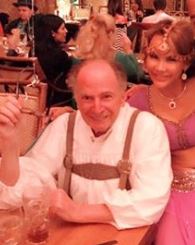 Ploenta Mendelson is several years younger than her late husband. Back in 2016, the two were pictured celebrating her 50th birthday at the Tonga Room & Hurricane Bar in San Francisco. That would make Ploenta Mendelson currently 53-years-old and at least 33 years, her husband’s junior. Ploenta Mendelson is believed to be originally from the Philippines.
We send our condolences.