Rob Cristofaro was the boyfriend of Leah McSweeney -a female entrepreneur and founder of the cult-favorite women’s streetwear brand Married to the Mob.

Rob’s former gal has taken into a new role as she was announced as the newest cast member of The Real Housewives of New York City following Bethenny Frankel’s departure.
The couple dated for a while and even have a 12-year-old daughter together named Kier or ‘Kiki’ for friends. Thoug they are no longer together they keep a close relationship.

In fact, when Leah began dating Rob -he was already known for his own brand Alife. At the time the blonde took $75,000 settlement and used it to start her line of feminine streetwear called Married to the Mob in 2004. She got the money after taking the NYPD to court following a physical altercation with the NYPD.

Rob Cristofaro is the mand behind one of the true originals and pioneers of the New York streetwear scene Alife. The brand had a recent resurgence and made a comeback last year teaming up with Crocs. 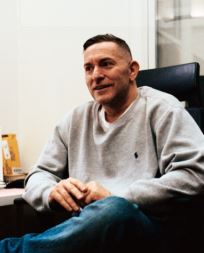 Cristofaro serves as Creative Director of Alife. He is an expert in Art direction, marketing executions and experiments, creative business practices, outdoor media expertise, Illustrator, brand architect. According to his LinkedIn, he attended School of Visual Arts in NY and holds a BFA in Illustration.

In addition to Alife -for which he is most recognize, Rob founded the New York Art Department (NYAD): A creative agency with focus on art, marketing and social interaction from 2011 until 2013. He also collaborated in the Art Department for ‘Married to the Mob’ and in 2013 founded Rob Projects – a specialist in contemporary marketing / branding™

Alife -the heritage streetwear brand which is now almost 20 years old, was originally founded as an artist collective and multibrand retail space by Rob Cristofaro, Arnaud Delecolle, Tony Arcabascio and Tammy Brainard.
Instead of slow and steady growth, it expanded quickly into wholesale and opened flagships. In 2007 it opened a store in Los Angeles, which was followed by Tokyo, Vancouver and a shops-in-shop within Colette. By 2014 all of the stores outside of New York had closed and they decided to scale back. Now Alife is focused on direct-to-consumer.
In 2001, Rob opened Alife Rivington Club (A.R.C.), as a first of its kind purveyor of quality footwear.