Michael Sanchez is the brother of former TV anchor Lauren Sanchez –the same woman currently in a relationship with Amazon founder and CEO Jeff Bezos.

Michael’s sister has been described as Bezos’ mistress –after he announced on social media Jan. 9 he was divorcing his wife “after a long period of loving exploration and trial separation.” Days later it was reported by the Enquirer that he had cheated on his wife with Lauren Sanchez.

The leaked texts, published last month, included notes from Bezos like, “I want to smell you, I want to breathe you in. I want to hold you tight.” 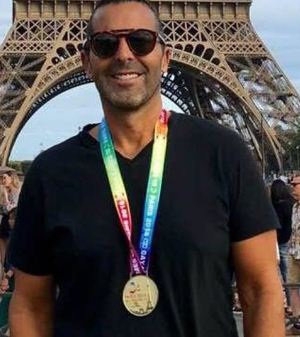 It is not yet clear how Lauren brother, Michael Sanchez, obtained the racy messages, but multiple sources told The Daily Beast that he was the one who supplied them. Also a lawyer for AMI said during an interview to ABC that the person who supplied the information is ‘well known to both Mr. Bezos and Ms. Sanchez’

The lawyer also said this person is a reliable person since it had given information to the National Enquirer for seven years prior to this story.

Michael and his sister, Lauren grew up in Albuquerque, New Mexico. The siblings appear to have a close relationship at least on social media.

Michael who is in his 40’s is a talent agent who is employed by agency Axis Management. He is said to be married to a man, he and husband, Casey Ashby –currently reside in Laguna Beach reports say. And did we mention he is a Trump supporter?