Laura Helm has identified herself as the woman who is currently suing Grammy singer, Usher for giving her herpes.

We finally have a face and a name for Usher’s herpes accuser who is asking for $20 million from the singer. Though is recent months the 38-year-old has been under fire after a first woman, Quantasia Sharpton, came forward saying she and Usher had been intimate while he knew about his disease.

However, Miss Sharpton also said, she tested negative for herpes. This is not the case for Laura Helm who becomes Usher’s second accuser.

According to TMZ, Helm says they were platonic friends and he wooed her by telling her about his humanitarian efforts in Africa.

In legal docs, Miss Helm gives a detailed description of her two sexual encounters with the singer. She basically says she never saw him finish because she saw him run to the bathroom. She adds that on the second time, he did not wear a condom. 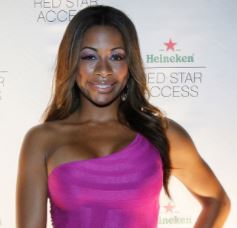 To her unpleasant surprise, days after their hookup, she noticed an unusual bump on the inside of her cheek. Her next symptom includes a similar bump, this time on her ******.

Laura Helm got tested after hearing that Usher had admitted to having herpes in court documents associated with another case. She was diagnosed with herpes simplex 2.

She had originally sought $10 million from Usher, but has since filed new docs increasing the amount to $20 million. Helm is seeking that amount to help with “emotional harm, medical bills and punitive damages.”

She is said to have come public after hearing that Usher has been intentionally stalling the case.

According to multiple reports, Laura Helm is a woman based in Georgia. The curvy brunette is believed to be in her early 30’s and though she is originally from New Orleans, she has been a resident of Buford, Georgia for several years.

She happens to be in the music industry –as a singer/songwriter herself, who goes by the stage name Laura Michelle.

Laura, who danced with the Ballet Hysell Dance Company and performing arts at the Brenau Academy and is a trained fashion designer –released her single “Never Be” in 2010.

Though she is currently off from any social media, she can be found under Laura Michelle. Photos of her attending the Heineken Red Star Access presents Roc Nation in 2011, can also be seen.

Will she write a song about her and Usher’s encounters?