Larry Dawson has been identified as the man who was involved in a shooting incident at the U.S. Capitol today Monday. The U.S. Capitol complex was placed under lockdown Monday after shots were fired at the entrance to the Capitol Visitors Center.

At first it was reported capitol police officers had been shot but that is not the case. It was Larry Dawson who was shot down by police in their attempt to stop a possible threat.

Visitors are required to pass through metal detectors on their way into the Capitol complex. The shooter was passing through one of the metal detectors when the detector went off.

That was when Larry Dawson pulled out his weapon.

According to NBC News Capitol Police said he appeared to be drawing his weapon when he was taken down.

66-year-old Dawson who was born, Larry Russell Dawson, had to be rushed to a local hospital. His condition was unknown but initial reports said he received surgery. A female bystander is said to also have been injured during the incident. 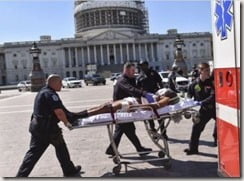 According to the Tennessean, Larry Dawson is a resident of Antioch, Tennessee. He had previously been in trouble with the law months ago. Dawson was known to police for an October outburst, that took place during a House session, when he yelled out that he was a “prophet of God.” At the time of the fall incident, he was charged for assaulting a police officer and unlawful conduct on Capitol grounds, the D.C. Court records online show.

Following the October incident he was ordered to stay away from the Capitol building. As a result, he wrote a letter to federal court, saying he wouldn’t comply and he called himself a ‘Minister and True Prophet of God.”

A a Capitol police spokesman labeled Larry Dawson’s actions as anything more than a ‘criminal act.”

Further more, according to online records, Larry Dawson declared himself bankrupt in 2011.

Larry Dawson is a pastor at St. Luke’s Community Church in Nashville, the church’s page says.