Sean Larkin is the cop boyfriend of singer/songwriter Elizabeth Woolridge Grant -whom you may know best as Lana Del Rey.

Sean and his talented girlfriend first sparked romance rumors after photos of them walking in Central Park surfaced back in October. He is 12-years her senior.

The New Yorker born June 21, 1985; received her first recording contract at the age of twenty while performing at a local club under the name Lizzy Grant. She worked in community service jobs when her first album got shelved by the record company.
Her breakout song “Video Games” propelled her to fame in 2011. Her debut album, Born to Die, peaked at number two on the U.S. Billboard 200. Her song “Young and Beautiful” became the theme song for The Great Gatsby in 2013. In 2014, she debuted her song “West Coast” at the Coachella Music Festival. 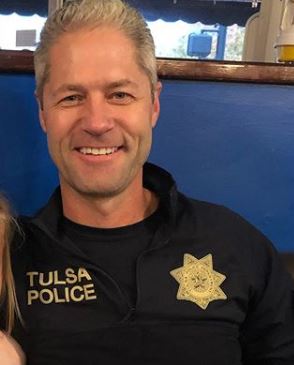 The “Summertime Sadness” singer was briefly romantically linked to Axl Rose in 2012. She also dated rapper G-Eazy before splitting in September 2017.
Now her new man happens to be a 46-year-old real life officer and father of two children.

Sean Larkin is a full-time police officer and Part time crossfitter -that, per his official Instagram account. In addition to being a full time ‘popo’ he describes himself as an Analyst on A&E TV’***** show LivePD and Host of A&E’s TV show PD CAM.
Live PD -is an Emmy Award-winning docu-series that tracks American policing today.
Sean Larkin who also goes by Sean “Sticks” Larkin -is in other words, a reality TV star.
When not filming, Larkin is your ordinary cop in Tulsa, Oklahoma’s police department. He will also add to his resume author since he recently announced via Twitter that he’s putting out a book with Dan Abrams, the host at Live PD.

When not filming, Larkin is your ordinary cop for Tulsa, Oklahoma’s police department. The 46-year-old is also the proud father of a 22-year-old daughter named, Alyssa Larkin; and a son in his teens.