Daniel Horton has been named as the new romantic interest of superstar Lady Gaga.

The alleged new couple was caught sharing a romantic moment over the weekend. The A Star Is Born actress and Horton were seen locking lips while enjoying brunch at Granville restaurant in Studio City, California.

Sources told E! the two have acutally known each other for a while and recently became romantic, adding that they are defenitley dating each other.
Oscar winner Gaga was previously in a relationship with Oscar Carino, she called off their engagement earlier this year. However, it seems she has moved on with new fella, Daniel Horton despite fans believing she and co-star Bradly Cooper had something going on behind the scenes. 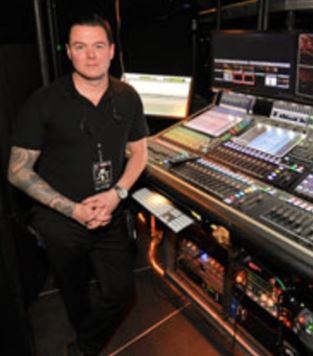 37-year-old Daniel Horton and Gaga have actually worked together. In 2018 he was hired to serve as her monitor engineer. According to his LinkedIn where he goes by Dan Horton, he is a Business Development/Consulting/Audio Engineering from Nashville, Tennessee.

In 2014, he was hired as a Monitor Mixer & Audio Advance at The Tonight Show starring Jimmy Fallon
by NBCUniversal Media, LLC. Prior to working in the sound department team for The Tonight Show, he worked on the 2011 flick, Glee: The 3D Concert Flick.
He is also listed as the owner at Audio Engineering Consulting Group since 2000.

Dan is actually a divorcee, In 2013, he and singer-actress Autumn Guzzardi became husband and wife. Though it’s unclear when and why they officially called it quits, Autumn last posted on her Instagram about Dan over three years ago.
Gaga and Horton have not yet publicly addressed their rumored romance.