Christian Carino is the man in the heart of songstress and actress, Lady Gaga –real name Elizabeth Johnson.

Christina and Gaga have been dating for over a year and the two have been inseparable since, appearing together at red carpets, sporting events, you name it; the two certainly put their love on display.

The couple recently confirmed what media have been speculating for a while, they are currently engaged. If they make it to the altar it would be the first marriage for Gaga and the second for Carino who was previously married to Brooke Baldwin. He and Baldwin divorced in 2015 after 18-years of marriage.

From his previous marriage he is the father of one daughter, Bella Carino –who lives in Santa Monica, California and is a student at Harvard-Westlake School. 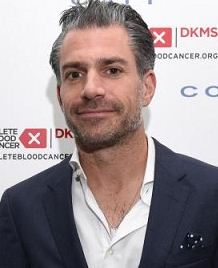 Carino was born in 1969; he attended New York University. Though he is not an actor per se, the entertainment business is his business. The handsome fella is an agent at CAA –otherwise known as Creative Artists Agency LLC.

Is safe to say Carino is an experienced agent, he’s dealt with big industry names such as Justin Bieber, Amber Heard, Christian Aguilera, Miley Cyrus, Jennifer Lopez and Harry Styles just to name a few of his clients.

He and Gaga were first spotted at a Kings of Leon concert together. The two were later spotted at the Super Bowl, he even kissed her while taking a selfie on the field, and finally the duo showed up to the Tommy x Gigi show together in Venice last year.

Gaga who is 18-year her junior, has been wearing a diamond ring for months now. She finally spilled the beans while being honored at the Women In Hollywood Awards hosted by Elle magazine in Beverly Hills –earlier this week.

Prior to Gaga, he was also romantically linked to actress, Lauren Cohan. Gaga was previously engaged to Taylor Kinney.