Kira Montgomery aka Taylor Tilden a **** actress who at one time she was one of Charlie Sheen‘s goddesses is the person who revealed he tested positive for HIV even though she received a large sum of money to keep the actor’s secret. Taylor Tilden who is now married to tattoo artist Jay de Anda used the money she extorted from Charlie to buy an expensive house in Calabasas.

28-year-old Taylor Tilden born Kira Lorelei Montgomery on May 22, 1987 in Santa Monica, California who has been in over 20 adult film alleged was the person who received millions f dollars from Two and a Half Men actor Chrlie Sheen to keep her mouth shut about his health issues, the actor who recently confirmed he tested positive for HIV also revealed he spend a fortune to keep his secret. But Taylor or Kira didn’t remain quiet and she allegedly said Sheen was diagnosed with the HIV virus.

“She used some of Charlie’s money to buy a house in Calabasas… and got married to a tattoo artist. His name is Jay De Anda.. He used to work at an ink spot over in North Hollywood. They’re both living off money they extorted from Charlie Sheen.”

Kira apparently leaked the info last year. The source she told Charlie and HIV was the Diary of a Hollywood Street King.

Then less than 20 minutes later King received a call from a Hollywood Fixer pretending to be an employee from King’s web-hosting company Bluehost was hired by Sheen to take care of King and everything about his HIV status revealed in their story.

“Hey, Jacky … you got a big problem, my friend. I’m looking out for you. I’m calling from Bluehost. Listen they were just here. They want to take the whole site down. If I were you I would take down the f—ing thing on Charlie…but you didn’t hear this from me.”

At that time Sheen didn’t know who revealed his secret, but he does now. 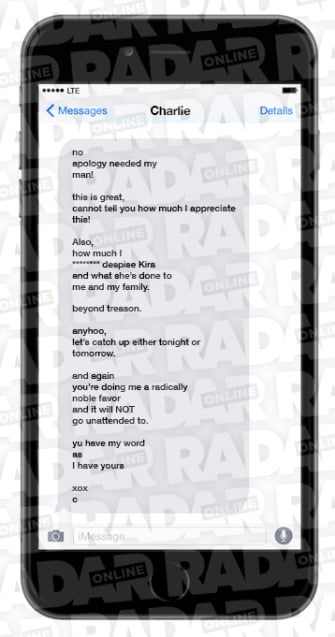