Kim Davis is the Kentucky based clerk who has been refusing to issue marriage licenses to same-*** couples due to her religious beliefs, sparking major controversy!

Kim who’s been branded as rebellious for her negative about providing marriage licenses to gay couples, could face fines and even jail time.

The Rowan County Clerk, stopped issuing licenses in the days after the U.S. Supreme Court legalized gay marriage denying both straight and gay couples of the license. A federal judge ordered her to issue them, and an appeals court upheld that decision. Still, she turned away couples.

Most recently things, keep getting ugly for Kim; according to reports, she showed up to work on Tuesday but again refused several requests to give out any license, even when the day before the U.S. Supreme Court ruled against her.

As a result, she and all her deputy clerks have been called for a federal court hearing Thursday morning. 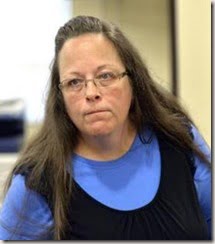 The website for the Rowan County Clerk, states Kim, is

“responsible for providing many services to the people of Rowan county. These duties include general categories of clerical duties of the fiscal court: issuing and registering, recording and keeping various legal records, registering and purging voter rolls, and conducting election duties and tax duties.”

Our office is here to serve the public in a friendly, professional and efficient manner. We are constantly striving to upgrade our services in order to better serve you. This website is our most recent attempt to better serve the people of Rowan county.

However, at least two gay couples have sued her, arguing that she must fulfill her duties as an elected official despite her personal religious faith; at least one of them said he feels “humiliated” according to the NY Daily News.

Kim Davis is married to Joe Davis, he revealed his wife has received death threats, and the couple changed their phone number. But he says he’s not afraid and believes in the Second Amendment. He also concluded his wife is committed to her faith and is “standing for God.”

How do you think this will end? Are you a supporter of Kim?