Kiara Cervantes also known as Ice Bae is a female border patrol officer based in Texas who is becoming quite the social media personality.

36-year-old Cervantes was nicknamed IceBae by users who are noticing her dolled-up appearance. Kiara Cervantes began turning heards after she was photographed standing outside of a holding cell, at the time she was working, providing security for Vice President Mike Pence during his recent border visit.

On Monday, Kiara Cervantes decided to make a video and created a Twitter account to identify herself to the world. Since then, she has been enjoying her new found fame with users from all over writing
“Holy s–t…I think I’m coming down with a case of undocumentation,”

“#IceBae could detain me for however long she wants,” another said. 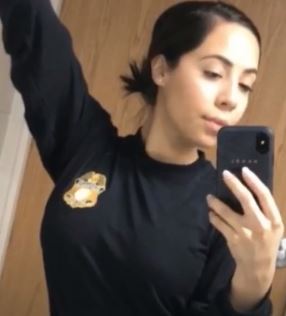 Kiara admitted to being in “awe” by all the attention she was receiving — some of which has been very negative. Some users decided to shame her for being Hispanic — adding that her parents were going to “disown” her.
Officer Kiara however, decided to focus on the positive writing “My job is so hectic at this moment but I am grateful,” she tweeted Monday night. “I love protecting my country! 🇺🇸🇺🇸❤️ And I love my supporters!”

Cervantes also told Twitter users that she takes “a lot of pride” in her job, which, according to her, can sometimes be “difficult.”
Her Twitter account already has 12k followers and her first tweet was to thank Vice-President Mike Pence for the honor of performing her job while he visited the detention center.
Kiara who has her fair amount of supporters online -most proud right wing conservatives, many wearing “Make America Great Again” hats in their profile pictures -have also showed her support with a user writing “Keeping America safe and looking good doing it.”